The Toyota Avensis has long been considered a bit of an also-ran against class leaders like the Volkswagen Passat and Ford Mondeo. Thanks to its below-par driving dynamics, lacklustre engines and dull styling, it has only ever won the hearts of cost-conscious mini-cab drivers and fleet managers.

However, a 2015 facelift was introduced to boost interest in the mediocre family car, with updated looks, more kit and cleaner engines – and this Touring Sports estate model arguably makes the most of all that new kit.

Toyota has improved the way the Avensis drives recently, by making it more comfortable and also a little more refined. It's certainly not the last word in driver involvement or enjoyment but it is easy and relaxing to drive. Buyers should probably avoid the entry-level 1.8-litre petrol engine because the BMW-derived 1.6 and 2.0-litre diesel engine make so much sense, with impressive amounts of torque and relatively low running costs. 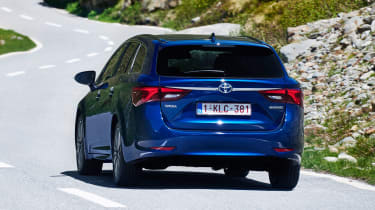 The 1.6 will suit most cost-conscious fleet buyers, but 0-62mph takes a long 11.7 seconds and peak torque is only available in a tiny 500rpm band. The 2.0-litre D-4D is more flexible, and considerably faster too – managing the same sprint in 9.5 seconds.

All cars are refined at a cruise thanks to the six-speed manual gearbox, and the soft but stable suspension means it rides well too. The 2015 update brought changes to the Avensis estate’s dampers, ensuring it rolls less in the bends and doesn’t push quite as far wide when you approach a corner carrying too much speed.

The model with the lowest running costs by far is the 1.6-litre diesel, with CO2 emissions of 110g/km and fuel economy of 67.3mpg. By comparison the more powerful 2.0-litre diesel claims 119g/km and 61.4mpg, offering a decent blend of performance and running costs.

The 1.8-litre petrol is best avoided, with the manual returning just 46.3mpg and 140g/km. However, it’s the only Avensis available with an automatic transmission, which is marginally more economical than the manual – posting figures of 47.1mpg and 139g/km. It’s worth noting that adding bigger wheels can adversely affect fuel economy and emissions.

Toyota offers a five-year warranty as standard so any breakdown costs won't come as a nasty surprise.

The Avensis Sports Touring could never be called a beautiful car but it's certainly not ugly either. Its clean lines were updated in late 2011, and again in 2015, bringing narrower headlights with LED daytime running lights, darkened tail lights and a grille that now fits in with the rest of Toyota's models. We think it’s more stylish than the three-box saloon, too.

The cabin may not be the last word in luxury but it’s still a great place to spend time and – so long as you don’t delve too far down into the footwells – is littered with expensive feeling materials, buttons and switches.

As you would expect from an estate model the Tourer majors on practicality. It has 543 litres of space in the boot with the rear seats in place but these fold flat with ease, which frees up a total of 1,609 litres of room. While that is good, it’s slightly down on the capacious VW Passat, which boasts 650 and 1,780 litres with the seats up and down respectively. 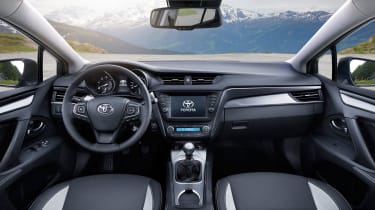 Passengers in the rear seats won't struggle for space either, as there's plenty of knee room for tall adults and a fair amount of headroom too.

The Avensis boasts a great reliability record like most Toyotas and buyers now have even greater peace of mind thanks to a standard five-year warranty on all new Toyota models.

Due to its age, and low sales figures, the Avensis doesn't place regularly in the Auto Express Driver Power survey, but Toyota as a brand is a consistent top 10 finisher in the manufacturer section that's often praised for its reliability and in-car tech.

Safety is also top-notch with Euro NCAP awarding the pre-facelift car a full five-star rating as well as 90 per cent for adult occupant protection. We expect the 2015 model to fare just as well. 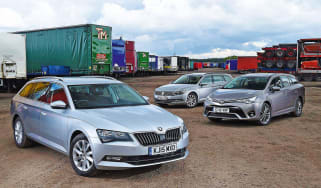 Skoda’s new Superb Estate is bigger and more stylish, but is that enough against rivals from Toyota and VW?
New Toyota Avensis Touring Sports review 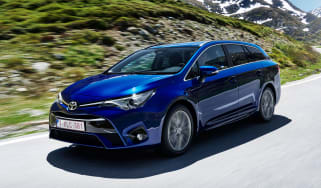 Fleet favourite Toyota Avensis gets a comprehensive update, with new looks, engines and tech
Skip to HeaderSkip to Content