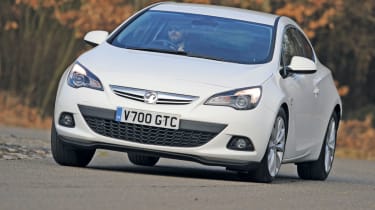 8
While the VW and MINI look to the past for inspiration, the Vauxhall Astra GTC is bang up to date. Sleek coupe styling, an upmarket interior and surprising practicality have made the newcomer one of the most desirable models of 2012. And in high-spec 1.6-litre turbocharged SRi form, the car promises to be as good to drive as it looks.
Despite having a passing resemblance to the standard Astra hatchback, the GTC was engineered as a separate car, with only the door handles and radio aerial shared with the five-door version. A low-slung roofline, muscular shoulders and bold creases cut into the flanks help the Vauxhall stand out from the herd.
Our sporty SRi test model also benefited from a set of attractive 18-inch alloy wheels. However, unlike the MINI, there’s no opportunity to personalise your car with decals and contrasting colours.
Inside, the GTC instantly feels more grown-up than the Beetle and MINI. The dashboard doesn’t have the design flair of its rivals, but is well laid-out and built from upmarket materials. There’s a decent amount of kit, too, including cruise control, automatic wipers and headlamps and a trip computer.
What really impresses is the Astra’s practicality. This is the only car in our trio that will accommodate five adults, and rear passengers get plenty of head and legroom. You’ll also find lots of useful storage space, such as the large glovebox and deep centre console cubby, while the huge 380-litre boot increases to a capacity of 1,165 litres when the rear bench is folded flat. Neither the VW nor MINI comes close to matching these figures.
At our test track, the Astra promised to put on a strong display, as its 178bhp 1.6-litre turbo engine has 20bhp more power than the twin-charged Beetle’s. Yet due to its 1,495kg kerbweight, the GTC took a tenth longer to do 0-60mph, posting a time of 8.4 seconds.
There’s little to separate the two in terms of real-world pace, although the Vauxhall’s engine feels lethargic at low speeds and is a little harsh and breathless at high revs. At least the six-speed box has a slick action, while the brakes are powerful and progressive.
Even more impressive is the Astra’s poise and composure through corners. Extremely direct steering, strong grip and good body control make it surprisingly engaging. Plus, the Vauxhall blends this agility with decent refinement. There’s very little road and wind noise, while the firm low-speed ride improves as speeds rise, helping to make the car a relaxing motorway cruiser.
Unfortunately, the price does it no favours. At £21,480, the GTC is the most expensive of our trio of test models. It also emits the most CO2, at 168g/km, and has the weakest predicted resale values and the most expensive servicing.
The question is whether the Astra’s great looks, spacious cabin and impressive driving experience are enough to offset this.

Chart position: 3WHY: What the Astra GTC lacks in upmarket image it makes up for with distinctive looks and interior space. It’s also good to drive and turbo promises hot hatch pace.