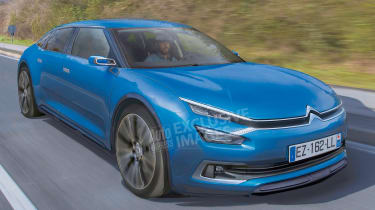 In a bid to keep its model range as diverse as possible, Citroen will radically reimagine the C5 saloon in 2018 with an all-new model based on the C-Xperience concept revealed at September’s Paris Motor Show. And our exclusive images show how it could look.

As traditional family saloons such as the Ford Mondeo struggle in the sales charts against crossovers and SUVs, Citroen will develop the C5 into a more desirable and attractive proposition; Vauxhall has used a similar technique with its more upmarket Insignia.

Speaking to Auto Express, Maxime Picat, executive vice president Europe for the PSA Group, explained: “We have to reinvent it. And that is exactly what Citroen tried to do with the C-Xperience – and to explain that there is still a future. 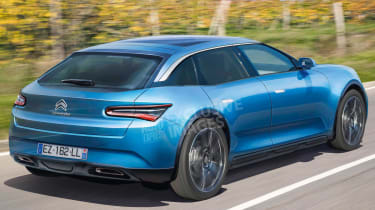 “There will still be customers who will want us to reinvent it – with more dynamism, more efficiency and aerodynamics. So there is a clear future for this type of car.”

Another key reason why Citroen will persevere with the traditional large family saloon is that Picat also sees a need to have alternative products in the range when inevitably, he says, the current SUV boom ends. “We all know that the SUV trend will at least slow down some time, for the simple reason many people buy SUVs today [as] it’s about differentiating,” he added.

“But in one or two years this customer at the traffic lights will see SUVs all around them,” Picat added. “They will look for something else because differentiation will always be the quest for the customer, so there might be something after the SUV.

“Interestingly, some [customers] tell us ‘please make an attractive car for us; we are fed up of having SUVs and boring sedans’.”

The C-Xperience concept that debuted at the Paris Motor Show will influence the all-new model. As our images show, the same fastback tailgate, cab-rearward design and intricate LED lighting will move it on from the forgettable silhouette of the old C5.

Mechanically, the next-generation saloon will be based on a modified version of the EMP2 platform – the chassis technology also used on the new Peugeot 3008. The platform has already been developed with electrification in mind; a plug-in hybrid model is understood to be in the pipeline. However, a range of conventional diesel and petrol engines will also be offered.

Another innovation will be new progressive hydraulic suspension. The system has been developed as part of Citroen’s Advanced Comfort programme, aimed at improving everything from ride comfort to customer satisfaction. The system will feature hydraulic cushions as well as conventional shock absorbers to soften and smooth body movements.

Big improvements in in-car tech and design will further boost its appeal. A new digital instrument cluster and array of HD touchscreens will remove a whole host of buttons and dials to create a clean and slick cabin.

Do you like the look of the new Citroen C5? Let us know in the comments section below...