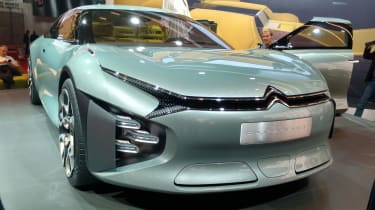 Citroen's star of the 2016 Paris Motor Show is the CXPERIENCE, a plug-in hybrid which could become a future replacement for the old Citroen C5 family car.

The concept is a large hatchback (Citroen calls it a two-box saloon) that’s around the same length as the current five-door Ford Mondeo. The CXPERIENCE is considerably wider, though, at two metres, and sits much lower, with a roofline at just 1.37 metres – some 10cm lower than the Ford’s.

The name – pronounced ‘C-experience’ – suggests a broader Citroen experience, and is a play on the CX name, used for the company’s family car from the seventies and eighties; a model that preceded the C5. 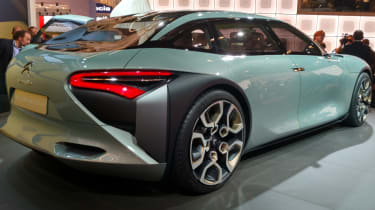 Indeed, the side profile of the concept is closer to the CX’s, with a long, shallow-angled glass hatchback and the blunt drop at the tail-lights. The back doors are rear-hinged – Citroen says they open to 90 degrees, allowing a wide aperture for access.

Inside, the concept showcases the latest developments in Citroen’s “Advanced Comfort” principles – the facia has an uncluttered, clean look with touchscreen controls instead of physical buttons, and a head-up display beyond a digital instrument panel. The dashboard is dominated by a 19-inch, widescreen display that can be reconfigured to show one, two or three main items. 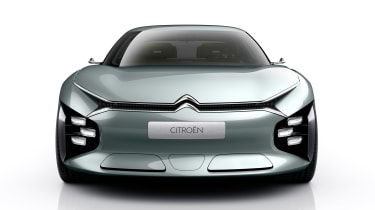 There’s also a dedicated smartphone stand in the front cabin, and a mobile tablet for the rear passengers that allows them to adjust their seats and air-conditioning settings, as well as share media files.

The concept is fitted with the latest version of the PSA Group’s plug-in hybrid powertrain, which pairs an 80kW electric motor driving the rear wheels with a front-mounted petrol engine developing between 150bhp and 200bhp. An eight-speed automatic gearbox sits between the combustion engine and the electric motor, and the new car can be driven in pure electric mode for up to 40 miles. Citroen claims the CXPERIENCE can deliver up to 300bhp when maximum performance is required.

A Citroen spokesperson stressed that the concept is not a direct preview of any model – specifically the next C5 or even a new C6 – but admitted that it is designed to show how the firm’s latest styling can work on larger models. Citroen badly needs to develop bigger cars to bolster its sales in China, its key market – and to flesh out its own range, now that the flagship DS 5 model has been hived off as part of that brand’s emergence in its own right. The ageing C5 saloon is the oldest existing model in the Citroen line-up – it was introduced back in 2007 – so it is ripe for replacement.

It’s not yet clear if Citroen plans to sell any future large saloons or hatchbacks in the UK. The C5 was dropped here earlier this year after poor sales – fewer than 250 found homes in the UK in 2015 – and Citroen UK may choose to focus its large-car efforts on its forthcoming range of SUVs, including the production version of the Aircross concept.

What do you think of Citroen's CXPERIENCE concept? Let us know below...

Welcome to our Paris Motor Show hub page. Scroll down for all our Paris content...
Citroen announces price drops and online specials as part of Fair Pricing Policy 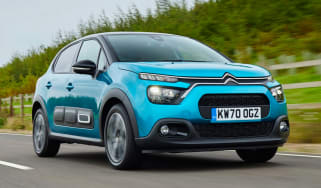