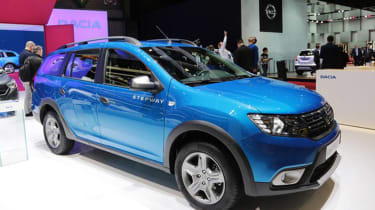 Dacia has confirmed its new Logan MCV Stepway will be priced from £11,495. First deliveries of the jacked-up estate car will begin in June. It’s designed to capitalise on the success of the Sandero Stepway, which currently accounts for nearly 60 per cent of all Sandero sales.

Based on the standard Logan MCV, the Stepway adds some crossover appeal with its raised ride height, black body cladding and chrome skid plates. The car is 50mm higher than the standard Logan, while also benefitting from the recent facelift – including updated LED daytime running lights, reprofiled bumpers and grille.

From the side, the Logan Stepway matches its Sandero sibling, with Dark Metal mirror caps and Stepway stickers on the door. Roof bars come included on the extensive kit list, too, while darkened tail-lights and further skid plates complete the look at the rear. 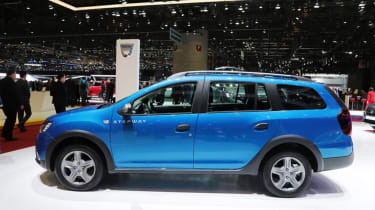 Inside, the Logan gets the brand’s new four-spoke steering wheel, as well as the same ‘3D weave’ seats as found on the Sandero. Stepway badging features throughout.

There’s one petrol (TCe 90) and one diesel (dCi 90) engine to choose from, and both come with a five-speed manual gearbox. Although unconfirmed, buyers will likely get a choice of Ambiance or Laureate specs – with the entry-level Access trim not usually available on pumped-up Stepway models. All cars get rear parking sensors, electric windows and a 12V power supply. A reversing camera is on the options list. 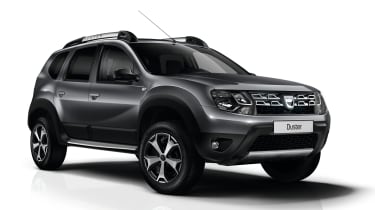 Dacia's Geneva stand also features a special-edition Duster called the Duster Summit (above). The limited-run SUV will also arrive in the summer, sporting loads of extra kit and a unique look. The Nordic Grey Duster is based on the top-spec Prestige trim, featuring 16-inch diamond cut alloy wheels, climate control, sat-nav and cruise control. It also gets exclusive orange stitching inside, and well as Dacia’s Baroudeur Pack, with wheel arch guards and protective side mouldings.

What do you think of the Dacia Logan MCV Stepway? Let us know in the comments section below... 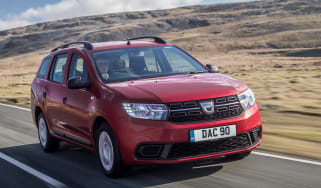 Want the most space for your money? The Dacia Logan is the cheapest estate car on sale in the UK today