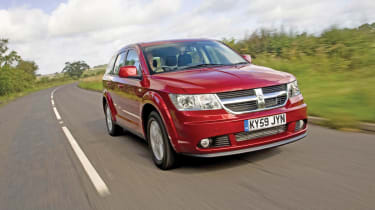 MEASURED purely in terms of on-road performance, the Journey lags behind its rivals. The ultra-soft suspension works well in a straight line, but struggles to control body roll in corners, while the unrefined diesel engine becomes intrusive on long trips. However, factor in the spacious cabin, good fuel economy and value for money price tag, and the Journey just about makes a case for itself.

Dodge has just embarked on a brand new Journey! The full-size MPV has been updated for 2010 with more efficient engines and extra standard kit. But is it enough for the seven-seater to make a splash here in the UK?

The Journey adopts a rugged off-road look that helps it stand out from the people carrier crowd, but it’s likely to divide opinion. The styling incorporates a prominent chromed grille and blocky headlights, which give the car its Tonka-toy looks and in-your-face American personality.

Under the bonnet is a 2.0-litre diesel engine mated to a six-speed manual gearbox, although a dual-clutch automatic option is also available. Dodge has cut CO2 emissions by 5g/km over the previous model, enough to drop road tax by £25, to £155 a year, and economy is boosted to an impressive 44.8mpg. However, this comes at a price.

The diesel unit is gruff on start-up and never really quietens down, even when warmed through. After a while, the engine noise becomes intrusive, which will prove tiresome on long trips – and that’s a shame as road roar and wind noise are nicely isolated from the cabin.

On Britain’s badly potholed roads, the Journey copes well. The super-soft suspension soaks up even the worst jolts, giving the car a ‘magic carpet’ ride. It’s not all good news, though. In corners there’s a huge amount of body roll, and after coming to a standstill the car bobs backwards and forwards on its springs.

In mid-range SXT trim, our test car came generously equipped. Foglights, 17-inch alloy wheels and ESP are all fitted as standard, while cabin quality is reasonable, although the instrument cluster feels cheap and looks outdated.

On the plus side, there’s masses of storage, including under-floor and clever under-seat cubbies. The middle row offers plenty of space, but adult passengers in the rearmost seatswill find themselves cramped.

Weighing in at around £22,000 with the optional sat-nav installed, our test vehicle was towards the top end of the Journey’s price range.

But if you can do without some of the more expensive optional extras, prices start from a more modest £16,995. And for a big, well equipped and practical family car such as this, that’s almost cheap enough to forgive the Journey’s dynamic downfalls.

Rival: Ford S-MAX Also recently updated, the S-MAX offers bags of fun behind the wheel, while still seating seven. A new EcoBoost engine has upped its performance credentials even further.