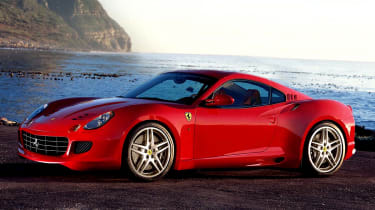 It's the supercar scoop of the year! Auto Express has had exclusive access to insider details and can now reveal all the details of the Italian legend’s most important new model of the decade. Yes, the Dino is back!

Despite being conceived more than two years ago, the whole project only got the green light in September, and is scheduled to be unveiled at a major motor show in 2009.

Taking the latter part of its name from Enzo Ferrari’s son, our contacts are confident that the eventual title will be ‘420 Dino’, with the number referring to the V8 engine’s size.

Back in Italy, one fierce debate is still raging between Ferrari, Pininfarina – the car’s designer – and Ferrari’s owner, Fiat. While all indicators still lean toward the Dino being a coupé-cabriolet with a folding hard-top, some bosses would prefer to launch the entry-level model as a berlinetta hard-top GTB first, followed soon after by a targa GTS.

Whatever is chosen, annual Dino production is figured to be anywhere between 3,500 and 5,000 cars, and Ferrari has actively sought partners to help lower and spread out the massive manufacturing costs. One company involved is aluminium specialist Alcoa, who will be making the spaceframe chassis in a new facility in Modena, Italy. The outer shell will be constructed from carbon fibre.

The new Dino started life as a Maserati in 2004. However, Ferrari’s then sister firm changed its plans, deciding to develop a luxurious Quattroporte-based coupé to rival the Mer­cedes CL instead. So Ferrari adopted the chassis and technology for the Dino.

Unlike the classic original, the newcomer will get a front-mounted V8. The unit is expected to be an all-aluminum 90-degree 4.2-litre unit with around 480bhp.

Inside, the Dino will be the first Ferrari to get standard-fit satellite navigation. The cabin promises to be practical, and alongside the carbon fibre trim shown, an aluminium finish will also be available. Transmission options haven’t been confirmed, but the paddleshifters are likely to control an automated manual.