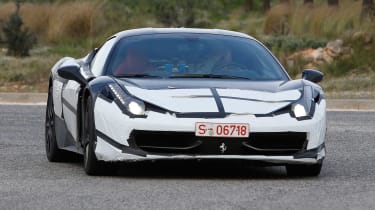 The upcoming Ferrari 458M has been spied testing ahead of its launch next year, giving us our best idea yet of how the revised supercar will look.

Sporting only light camouflage, we can see that the turbocharged 458 will get a new exhaust system with two instead of the three signature pipes, while a new bumper is expected to improve the car’s aerodynamics and high speed handling.

Changes at the front are less obvious thanks to the reams of white tape, but there’s a chance the 458M will get new headlamps and a slightly tweaked front end. The slits behind the lights remain, as do the flexible rubber winglets in the front bumper. It’s safe to say from these images that any cosmetic changes will be evolutionary rather than revolutionary.

Engine details will be confirmed closer to the car’s release date, but it’s clear that Ferrari will favour the turbocharger route with this new 458M. The company has already fitted a 552bhp 3.8-litre V8 turbo to the California T, and it’s likely we’ll see the same engine – albeit in a higher state of tune – fitted to the new 458 supercar. It’ll replace the naturally aspirated 4.5-litre V8 in the current car, but with a significant power increase to more than 650bhp. 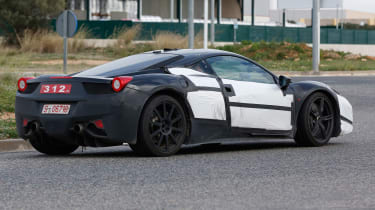 The decreased displacement should interest Chinese buyers, where customers are taxed heavily on larger engines. However, this is unlikely to be of much consideration to Ferrari bosses, who will want to maintain exclusivity and the notoriously long waiting lists.

It won’t be as easy as simply ramping up the power for Ferrari’s revised 458. The torque increases would play havoc with the current Getreg seven-speed dual clutch gearbox, so it’s likely engineers will be tweaking this to cope with the extra horsepower, too.

Ferrari insiders told us the car is expected at the Geneva Motor Show in the spring, but the project could be delayed to Frankfurt if the development team need more time. There’s no question the 458M will raise the bar when it arrives next year, and it’s clear Ferrari wants to get it right first time.