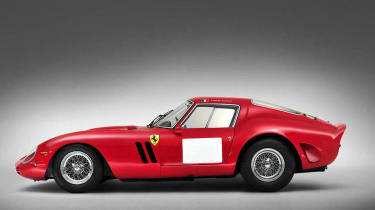 A UK based Ferrari specialist has listed a 1962 Ferrari 250 GTO which could become the most expensive car in the world, thanks a price tag of £45 million.

If that lofty asking price was realised, it would eclipse the current record for a car sold at auction by a significant margin – £23 million was paid in 2014 for another 250 GTO, sold by Bonhams during Monterey Car Week. Of course, the record for the most expensive car ever sold is a little bit harder to pinpoint as the exact figures involved in private sales are rarely made public. There's no doubt that at £45 million, however, this Ferrari would be there or thereabouts.

This particular example comes with a very special pedigree. Finished in metallic blue with a white stripe, it was completed in March 1962 and briefly used for development purposes by Ferrari at Monza. It’s the second of 39 cars built, but this one has the distinction of being the first 250 GTO to be raced. It was sold into private hands in 1962 and took part in that year’s Sebring 12 hours. Driven by Phil Hill and Olivier Gendebien, it finished first in class and second overall.

Later that year, the car made its way to Le Mans, placing third in its class and finishing sixth overall. The vast majority of its pro appearances on track took part in the United States before its final one in 1965, winning its class that year’s Tourist Trophy at the International Bahamas Speed Week at Nassau.

Since then the car has traded hands numerous times, appearing at concours events, the Goodwood Revival, and most recently appearing on display at the Simeone Foundation Museum in Philadelphia.

The 250 GTO consistently places as one of the most sought after collectable cars. Using a 3.0-litre V12 with 300bhp, and with a weight of just 880kg dry it was capable of a top speed of 174mph. A full breakdown of the car’s extensive history is available over at Talacrest.

Would a 250 GTO be on your shopping list if you hit the Euromillions jackpot? Let us know in the comments...