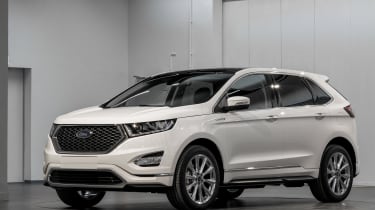 After Ford launched its first 'Vignale' with the Mondeo last year, the premium sub-brand has now made its way across to the full-size Ford Edge SUV. The Ford Edge Vignale was publicly revealed at the 2016 Geneva Motor Show, but we went in for a closer look at the brand's design studio in Cologne.

The Edge is undeniably large, although the car’s North American origins have become less overt as we Europeans have started buying larger SUVs anyway. Even so, the 20-inch wheels – the same design that features across all Vignales – don’t look particularly oversized for its frame. At the front, the grille differs from the bars of conventional Edges; it’s the hexagon-based Vignale design instead, and it suits the car’s strong, bluff nose treatment.

Breaking up the Edge’s flanks are subtle chrome strips that run along the bottom crease of the doors, and at the rear is a single Vignale badge – no ‘Edge’ or ‘TDCi’ here – and more subtle metal finishes around the rear bumper. Principles established on the Mondeo have indeed transferred to its larger stablemate. 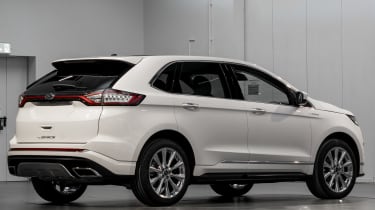 Inside are trademark Vignale touches that we’ve seen on the family car: double stitching on the top of the instrument cowl that’s always in your line of sight, contrast piping (called a “Tuxedo line”), a ventilated hexagon pattern on the seats and a huge swathe of leather over the top of the dashboard. It’s crafted by Eismann on the same production line as the leather for some Bentleys and Porsches.

Here, in the stark lighting of Ford’s studio, the Edge looks a compelling proposition, and perhaps Vignale’s best chance to steal sales from other brands. You could see how someone contemplating a mid-sized German SUV could be tempted by a larger and plusher offering for roughly the same price.

Would you buy the new Ford Edge in Vignale form? Let us know below!