US-developed Ford Edge SUV has been a long time coming, so is it worth the wait? 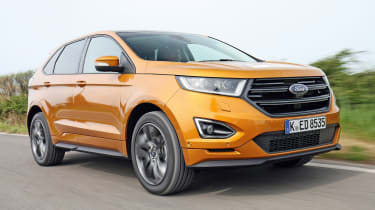 The Edge is a perfectly adequate SUV – it neither disappoints nor excels in any particular area. But at this price it’s vulnerable to a wealth of talent, in particular the BMW X3 and Mercedes GLC, both of which are on a different level in terms of ability, desirability and quality. The Edge looks the part and is packed with kit, but you need much more than that to challenge in this competitive class.

You could be forgiven for thinking the Ford Edge had been around for some time. First shown as a concept back in 2013, it then went on sale in the US two years ago, before finally making the trip across the Atlantic and on to European soil. So it faces a tough fight when it reaches UK showrooms in the middle of the year, thanks to the frantic and competitive nature of the SUV market the Edge is wading into.

To give you some context, the Edge sits above the EcoSport and Kuga in Ford's SUV hierarchy, and is aimed at established German rivals such as the BMW X3 and Audi Q5. But don’t think it’ll leave you better off financially just because it’s a Ford; the Edge costs largely the same as the competition it’s squaring up to. Prices start from £29,995 and rise to £36,750 – the sort of cash buyers have been spending on X3s for years. 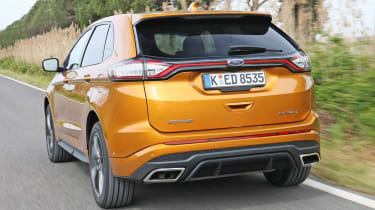 The car we have here sits at the very top of the line-up: a 208bhp 2.0-litre biturbo diesel, fitted with a six-speed automatic gearbox and four-wheel drive. In Sport spec, it’s the most expensive Edge on sale – without options – at £36,750.

You do get plenty of kit for your money; active noise-cancelling technology, 20-inch alloy wheels, a leather interior, an eight-inch infotainment system with sat-nav and a front view camera all come as standard. If you want your X3 or Q5 to match the Edge for kit, you’ll have to head to the options list.

The Edge looks the part, too. It’s nicely proportioned with broad shoulders and chiselled flanks. Sport models also get darkened front and rear bumpers and chrome tailpipes as extra decoration. 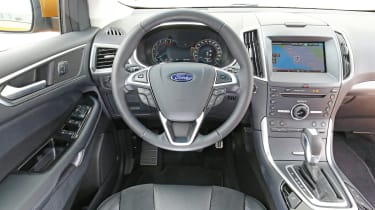 Inside is less exciting, though. The Edge is based on the same platform as the humble Mondeo, so comes with a selection of the same engines, and an identical interior. It’s not unpleasant, but the design is just a little bland and unimaginative – especially compared to the equivalent opulence the Mercedes GLC will cocoon you in for almost the same amount of cash.

And something else the Edge has adopted from its smaller sibling is a rather unremarkable driving experience.

The new Mondeo ushered in a more comfort-oriented and relaxed character for big, modern-day Fords. For an SUV – whose primary function is to transport lots of people and things around comfortably – a more relaxed manner sounds like an ideal foundation to work from, but it has its drawbacks. 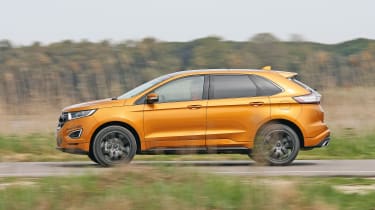 On the move, the Edge absorbs bumps and ruts, but the large 20-inch alloys do sniff out bigger road imperfections. There’s softness in the suspension, despite Sport models coming with firmer springs, which means there’s a noticeable degree of body roll though corners – more so than any of its rivals. This is exaggerated by the disconnected and elastic feel of the steering.

Few of the Edge’s rivals are what you’d call engaging to drive, but all go about their business in a more polished way. The engine-gearbox combination is slick, but it does feel a little hesitant working its way through the ratios, which, combined with the hefty kerbweight, can make performance feel blunted.

The Edge is over two tonnes with a couple of passengers on board, and you can really feel it; acceleration is lethargic even with 208bhp and 450Nm of torque. But what’s likely to matter more to buyers is space and practicality, and here the Edge begins to claw back some honour. 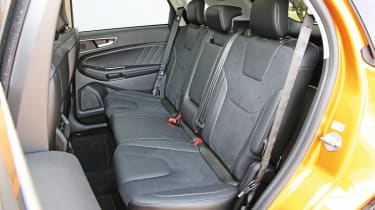 With the rear seats in place, the boot measures in at 602 litres, which swells to 1,788 litres if you drop the rear seats. That’s more than any rival from Audi, Mercedes or BMW, but that cavernous load area does appear to have come at the expense of rear passenger space. The back isn’t what you’d called cramped, but given the Edge’s significant size advantage over the Q5 and GLC, there appears to be little benefit for those sitting in the back. Legroom is generous enough, but you’d be just as comfortable in the back of an Audi.

A bigger issue was the optional panoramic roof fitted to our test car, which noticeably impinged on headroom. As bright and airy as it makes the cabin, it’s probably not worth the sacrifice you have to make in terms of practicality.