The high spec Ford Edge SUV delivers lots of kit and SUV style but can it compete at the premium price point? 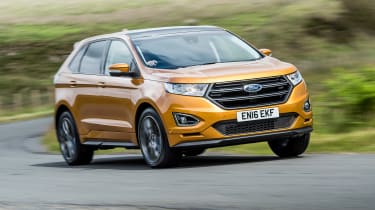 The Ford Edge is practical, well equipped and looks stylish, especially in this top-spec Sport trim. However the firm ride, high price and dull driving experience mean it’s hard to recommend over a Mercedes GLC or BMW X3, which cost around the same and offer a much more sophisticated drive as well as a premium badge. Get a good deal or lease and you could be onto a winner, though.

With the SUV market booming, Ford is revamping its range in the UK, with this new Edge being its largest model yet. The Ford Edge sits above the Kuga and EcoSport in the brand’s SUV range, but rather than being a good-value alternative to the BMW X3 and Mercedes GLC, a £30k-plus price tag means it’s competing on the same terms as those cars.

In fact, our top-spec Sport model costs £34,500 as standard, but add the Electric Spice orange paint, active park assist & cruise control and Lux Pack (which includes electric, heated and cooled front seats and a panoramic roof) and you’re looking at £37,845, which is well into premium SUV territory.

The Edge certainly matches the Germans for style, with its chunky proportions and wide grille at the front. In Sport trim you get some 20-inch black alloys, which look great, and the small bonnet bulges are a nice touch that you can see from inside the car as well. 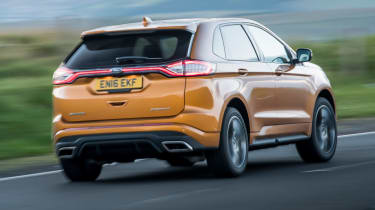 The Edge interior is well put together, and doesn’t completely let the side down, but it’s nowhere near as good looking as the exterior. The design is bland and there are some cheap-looking materials used in some places, plus some ‘fingerprint magnet’ gloss black on the centre console. The leather seats and steering wheel do help give it a more upmarket feel, but Ford’s effort is still not as plush inside as an equivalent Mercedes GLC.

Of course, there is loads of equipment in the Edge, certainly more than an equivalent BMW or Mercedes. Those leather sports seats, active noise-cancelling tech, an eight-inch display for the sat-nav, auto lights and wipers, a rear-view camera and DAB radio are all standard on our Sport model. Traffic sign recognition and lane keep assist come fitted, too.

There’s loads of space inside, which does give the Edge, well, another edge over the competition. The 602-litre boot goes up to 1,788 litres with the rear seats down, which is more than any of its German rival cars. It’s a really useful space, and the electric tailgate means it’s easy to load and unload.

Rear-seat passengers will be pleased with the space in the Edge, as there’s enough legroom for adults in the back to get comfortable behind even tall drivers. The panoramic sunroof fitted to our test car impacts on headroom, but there’s still plenty for a six-foot passenger to sit upright.

While passengers might not have an issue with the space on offer, they might with the ride quality. On British roads the Sport model is on the firm side, and while it doesn’t crash into potholes the larger wheels and Sport suspension do mean it gets uncomfortable on our uneven streets. We tried a Titanium model without this suspension set-up, on smaller wheels, and it was definitely better. 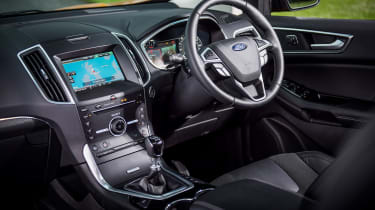 In corners, the Edge isn’t as composed as you might expect given the ‘sporty’ ride quality, either. It’s not too bad, but there’s some body roll and you can feel the car’s near two-tonne weight shift around. The steering is quick, but could be sharper and proved particularly frustrating on a loose farm track on our route as a result of the limited feedback.

The 2.0-litre 178bhp engine is fairly smooth, and with 400Nm of torque it feels punchy enough provided you get the right gear. You may need to change down to get from 60 to 70 on the motorway, but the manual gearbox is easy and pleasant enough to use.

Despite its shortcomings, the Ford Edge does still have some appeal in the UK. It’s certainly more distinctive than its German SUV rivals to look at, and there’s loads of space inside, but it remains an interesting left-field alternative rather than a front-runner in this competitive segment.