We’ve tried the flagship Ford Edge SUV, but is the mid-spec car a better buy? 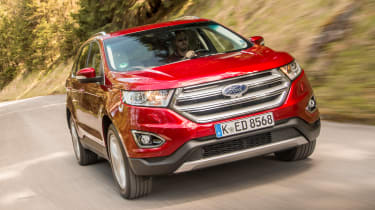 The new Ford Edge excels as a comfortable, refined and very spacious SUV. It’s good looking and well equipped, too, although its sheer size and weight mean a number of rival five-seat SUVs handle and perform significantly better. It’s a shame it doesn’t come with seven seats to make it more competitive in the class, too. But this Titanium model makes more financial sense for most buyers than the pricey, firmer-riding Sport version.

We have already driven the new Ford Edge, and concluded that it was a solid but pricey effort next to rivals like the BMW X3 and Audi Q5. But that was a top-spec Sport version with all the trimmings, so does the cheaper and more comfort-biased Titanium model make more sense?

Although the Edge Sport is merely a trim level, it does bring some significant exterior changes to make the SUV look a bit more aggressive. This Titanium model costs £32,245 and does without the black grille, larger wheels, sportier bumpers and large, fake exhaust tips of Sport cars. The overall impression is of a softer, less imposing SUV, but the Edge’s wedgy shape and sporty stance still turn heads next to more conservative rivals. Although the wheels are smaller, they’re still relatively large at 19 inches, too. 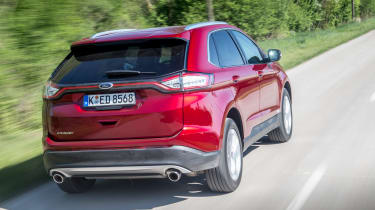 Inside, there’s very little difference between the two versions; in fact, the cheaper model’s cabin is virtually identical. You still get the same solid (if rather plain) dashboard lifted straight out of the Mondeo saloon and S-MAX MPV, and all models have the eight-inch SYNC 2 central touchscreen which, as always, can prove quite fiddly to use. There’s also Ford’s digital instrument display, which is smart but so crammed full of information it can be distracting.

Even a mid-spec Titanium model gets kit like sat-nav, an electric bootlid, heated front seats, acoustic glass and parking sensors. However, leather trim remains an option on all Edges, and as it’s part of a £2,000 Luxury pack it’s pricey. That might seem a bit mean as this Edge is almost in the same bracket as an X3, but to spec up the BMW to the same level (with four-wheel drive, too) would cost thousands more. It’s worth bearing in mind, too, that even the entry-level Hyundai Santa Fe starts at £32,000, while it’s not difficult to take the price of a Honda CR-V to nearly £35,000 with a few options.

One thing we’re disappointed by is that Ford doesn’t offer the Edge in the UK with seven seats (although it does in China), which immediately means cars like the Kia Sorento or Land Rover Discovery Sport have the upper hand. Still, it provides class-leading levels of space for four adults. The optional panoramic roof does noticeably eat into headroom, however. There’s no shortage of space in the boot, either; at 602 litres, it’s larger than all of its main rivals’. 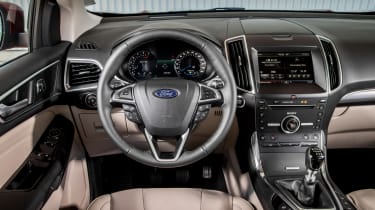 One benefit of opting for Titanium spec over Sport is the different chassis tuning. The former gets a softer spring and damper set-up, which means exceptional ride comfort for this class of car. The Edge glides over bumps that would unsettle an Audi Q5, and thanks to the acoustic glass and active sound cancellation tech, wind and road noise are notable by their absence.

The trade-off, as is usually the case with SUVs of this type, is handling. The Edge wallows and rolls about in corners, but the stiffer Sport model barely fares any better as the Edge weighs nearly two tonnes regardless of spec. Grip levels are good enough thanks to the standard four-wheel drive, and even though adaptive steering has been relegated to the options list, the car still steers precisely enough. It’s a large, heavy SUV, but for those who prioritise comfort the Ford is one of the better five-seater choices around.

While the faster 207bhp 2.0-litre diesel is automatic-only, buyers of the entry-level 178bhp TDCi get the choice of a standard six-speed manual gearbox or optional automatic. Ford predicts most will still opt for the self-shifter, however, which makes sense given that the Edge is a car that puts comfort high on the agenda. The manual isn’t a great match as a result, but at least the shift is slick and the clutch is light. 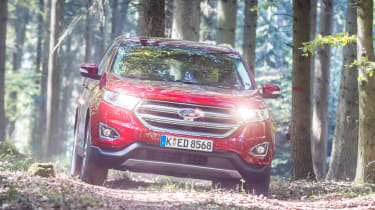 That’s handy, as you’ll find yourself using it a lot. Considering that the twin-turbodiesel range-topper doesn’t exactly give the near-two-tonne Edge sharp pace off the line, performance from this single turbo unit is never anything more than adequate. Even though it has 400Nm of torque, there’s no real low-down urgency, while overtaking requires a couple of downshifts.

Still, it’s smooth and refined at low revs, and the performance will meet most buyers’ needs. We’d argue, too, that the Edge’s 4WD security and refinement are more important in a family-friendly SUV than outright pace.