The Edge SUV is the new flagship 4x4 in Ford’s line-up. Does it have what it takes to worry the Audi Q5? 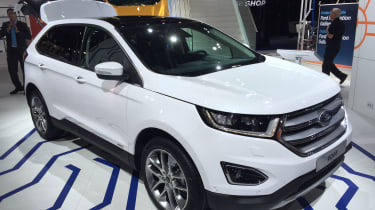 The Ford Edge 4x4 was revealed at the Frankfurt motor show in 2015, and threatens a major shake-up in the hard-fought SUV sector. That’s because it’s packed with tech, has a fresh new face, and offers better value and more interior space than premium SUV rivals like the Audi Q5.

Prices were announced recently when the car went on sale, and start at just under £30,000. That beats the entry-level BMW X3 by £1,000. The Ford Edge shares much of its under-the-skin engineering with the new Ford Mondeo. Like its sister model, the Edge went on sale in the US some time before it arrives here. In UK dealers, the Edge will slot above the Kuga and Ecosport giving Ford a trio of SUV contenders at different levels in the market. 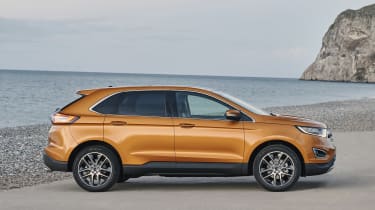 As you might expect, the Edge arrives with a specification that should look highly appealing in the showroom. The £29,995 entry model is fitted with a 178bhp 2.0 TDCI diesel engine paired with a six-speed manual gearbox, and comes in Zetec trim. The spec sheet includes Ford's intelligent all-wheel drive set-up, an infotainment touchscreen with DAB radio, heated and cooled front seats, plus active noise cancellation, privacy glass and big 19-inch alloy wheels.

If you want to move up to Titanium spec it will cost and extra £2,250, while the Sport trim level is the range-topper and costs from £34,495. There’s a second powertrain option at launch, which is a 208bhp twin-turbo 2.0 diesel with a six-speed automatic gearbox. In spite of a significant performance differential, both units promise exactly the same economy and emissions figures of 48.7mpg and 149g/km of CO2. 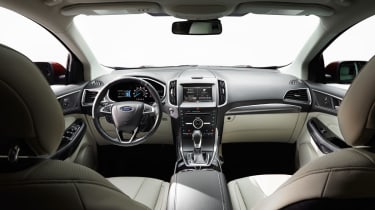 The Edge is part of the firm's global 'One Ford' strategy, which sees a model being designed to meet the demands of worldwide customers rather than region-specific vehicles.

Although the centralised business model is controversial, it's one reason why cars such as the Edge and the Mustang, which is on sale here for the first time, can be offered in the UK. And Ford assures us that the European Edge has been sufficiently revised to suit our demands.

The gaping front grille is a raised-up version of the Mondeo's, while the muscular lower bodywork and large 20-inch wheels amplify its stance to make it seem larger than it is. The clamshell bonnet is a design cue borrowed from Land Rover, too, while distinctive single-bar tail-lights mark it out from the rest of Ford's UK range.

The five-seat interior claims to offer more passenger space than midsize SUV rivals, even rivalling larger models such as the VW Touareg. Much of the dashboard and centre-console layout is borrowed from the Mondeo, and borrows new tech such as inflatable rear seatbelts and Active Noise Cancellation. 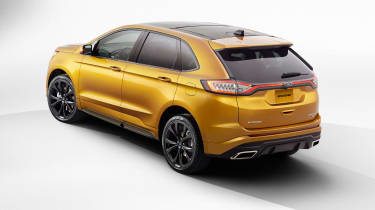 Ford is also planning to update the Ecosport again for the 2017 model year, while the Kuga will also receive mild tweaks and the latest Sync 2 infotainment system next year.

Do you think the Edge has what it takes to compete in a tough sector? Let us know below.