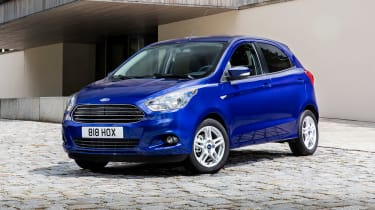 Ford is aiming for budget-conscious small car customers who would normally choose second-hand vehicles with its new value offering, the Ka+, which aims to serve up supermini space for city car money. Prices will start from £8,995.

Despite its name, the model you see here bears no relation to the diminutive Ka city car, which will be killed off as part of a realignment of Ford’s small car strategy.

The new vehicle is almost as large as a Ford Fiesta, in fact, and uses many of that car’s components, including Ford’s global small car chassis technology. 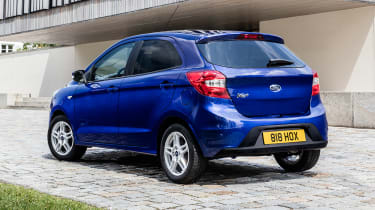 While the car has already gone on sale in South America, and is being built and sold in India, Ford says it has improved quality and handling to meet the higher expectations of European buyers.

The Ka+ is a little shorter than the existing Fiesta, but it’s 21mm taller. The 270-litre boot – including 13 litres of underfloor storage – is only 10 litres shy of the Fiesta’s load space. 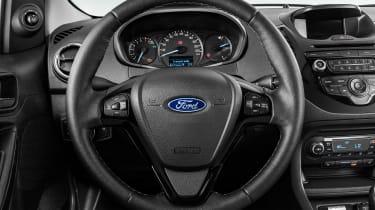 There’s a significant lip to lift items over, although the space itself looks usefully square, and can be extended using the 60:40 split-fold rear seats.

The Ka+ will be available in three specifications, although all of them feature the same engine – a 1.2-litre four-cylinder petrol paired with a five-speed manual gearbox. The most basic spec and trim level will be called Studio, with a 69bhp version of the engine.

The higher-specced Zetec will get the same motor, but also an 84bhp engine with 112Nm of torque. The 84bhp Zetec will do 0-62mph in 13.3 seconds, with emissions of 114g/km, while an ECO version boasts different gearing and low-rolling-resistance tyres to slash CO2 to just 110g/km. 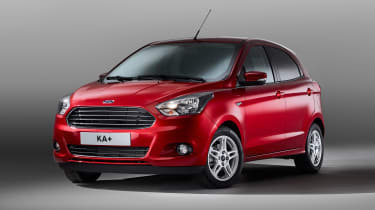 Inside, there are five seats, but room for four adults to travel in comfort, with plenty of legroom and headroom even for six-footers. The dashboard mixes hard plastics with reassuringly familiar and solid Ford switchgear, plus some clever touches such as foam padding in the door panel where your elbow would normally rest.

The Studio trim won’t get air-conditioning as standard, although it is available to order as an option pack. Standard kit includes remote central locking, electric front windows and electrically adjustable door mirrors. It also features MyFord Dock – a storage bin on the top of the dash that can be used to charge and mount smartphones so their navigation systems can be used while on the move.

The more expensive Zetec editions get manual air-con, along with the first generation of Ford’s SYNC infotainment system, accessed via a small colour display that will be familiar to current Fiesta owners. Buyers can also choose from a wider range of options, including 15-inch alloy wheels, a leather steering wheel with cruise control, folding side mirrors, DAB radio, climate control, electric rear windows and heated seats.

All Ka+ models will get six airbags and electronic stability control. Ford hasn’t crash-tested the car yet, but Darren Palmer, director of B-platform vehicles, said he expects the Ka+ to “perform at least as well as the current Fiesta”. Under the latest regulations, this should equate to a four-star Euro NCAP rating.

What do you think of the new Ford Ka+? Leave us a comment below!