The limited-edition Hyundai Kona comes with STARK Industries branding and Marvel logos, and it’s coming to the UK 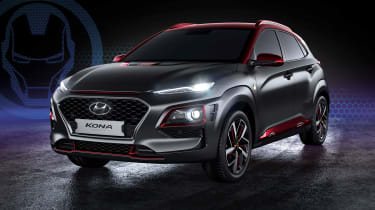 Hyundai has teamed up with Marvel to create a new “Iron Man” edition of its Kona SUV. Priced at £27,995, it bears a host of styling upgrades inspired by the Iron Man film series.

To start, the Kona gets a redesigned exterior finished in two tone “Iron Man Matte Grey” and “Red Armour,” along with an Iron Man emblem on the roof, “STARK Industries” branding on the sills and a deep bonnet scoop.

The interior receives the same treatment; the Kona’s heated leather seats are stamped with “STARK” branding, the infotainment system displays Iron Man’s eyes on startup and the gauge cluster features the superhero’s Arc Reactor as a background graphic. To finish it off, the dashboard bears the signature of Tony Stark.

Despite what the instrument cluster might suggest, the Kona Iron Man edition isn’t powered by a miniaturised Arc Reactor and rocket thrusters, but an entirely conventional 175bhp 1.6-litre, four-cylinder turbocharged petrol. Performance falls short of the Iron Man suit, however, with a more leisurely 0-62mph sprint of 7.9 seconds and 127mph top speed. 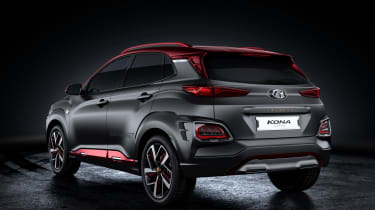 The Kona Iron Man edition comes as standard with the equipment from the upper end of the Kona range, including automatic LED headlights, keyless entry, air-conditioning Android Auto, Apple CarPlay and a head-up display.

What do you make of the Hyundai Kona Iron Man Edition? Let us know in the comments section below… 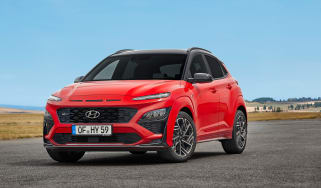 The Hyundai Kona has funky looks, but the driving experience is firmly in the middle of the pack