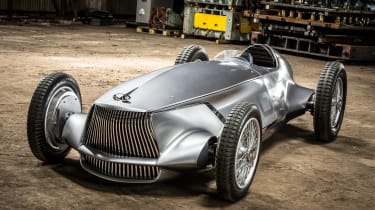 Infiniti has revealed a new concept car at Pebble Beach Concours d’Elegance called the Prototype 9. It’s an EV, built by a small team as an after hours project, and is designed to show how a 1940s Infiniti Grand Prix car would have looked – despite the brand only launching in 1989.

Under the bodywork is a next-generation EV powertrain from Nissan’s Advanced Powertrain Department. A 30kWh high-voltage battery is paired up to a new electric motor, which develops 148bhp and 320Nm of torque.

Power is delivered through the rear wheels; and Infiniti claims the Prototype 9 can cover 0-62mph in 5.5 seconds and hit a top speed of 106mph. The battery will last 20 minutes under heavy track use, according to the Japanese brand. 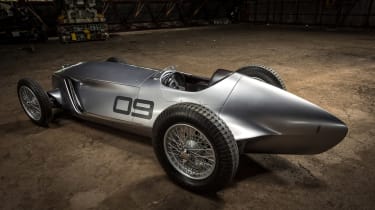 Infiniti says the look of the Protoype 9 has been inspired by Japanese Motorsport and aeronautical design. It features an exposed cockpit, open-wheel layout, 19-inch wire-spoke wheels and modern Infiniti design cues such as the double arch grille.

The cabin, meanwhile, is handmade, while a single leather seat features contrasting red stitching with a Japanese flags etched into the headrest. The steering wheel rotates around a fixed centre hub, which includes all the instrument binnacles.

Do you like the Infiniti Prototype 9 concept? Let us know in the comments section below...