Jaguar is planning a new large all-electric SUV, which will sit at the top of its line-up, acting as an eco-friendly alternative to the Porsche Cayenne 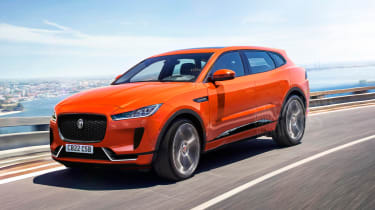 Jaguar is applying the finishing touches to a new all-electric SUV, which will sit above the I-Pace in the brand’s line-up. It’ll be called the J-Pace and serve as a direct competitor to the all-electric Tesla Model X.

Jaguar’s recent management shake-up saw Ralf Speth hand over the company reins to the former head of Renault, Theirry Bolloré. Auto Express understands that one of Bolloré’s first acts as chairman will see the company evolve into a fully electric brand, moving to compete directly with the likes of Tesla and Polestar.

Official details on the J-Pace project are still under wraps, but it’s understood that the electric SUV will be based on the same MLA architecture that will underpin the next-generation Jaguar XJ and Range Rover. The platform has been engineered to support petrol and diesel, plug-in hybrid and fully electric power, but the J-Pace will be an electric-only model.

Production of the J-Pace will take place at Jaguar’s Castle Bromwich facility, which was part of JLR’s £1bn investment into the development of electric vehicle.The site has been transformed to support production of all of the British brand’s pure-electric models.

In order to be competitive with the range-topping Tesla Model X, the J-Pace will need to achieve a maximum WLTP range of around 300 miles. Four-wheel-drive is expected, while the MLA platform is said to be capable of supporting batteries as large as 100kWh. However, smaller battery options are also likely to be offered in order to lower the price point of the J-Pace.

Our exclusive images give you an idea of how the finished model could look; it will adopt styling cues form the smaller I-Pace but bear a similar profile to that of the larger F-Pace. A blanked off front grille and slender LED headlamps will be its defining features.

Although the J-Pace will sit at the top end of the British firm’s line-up, Jaguar’s design boss Julian Thompson is also keen to explore smaller cars. “I would love to do smaller Jaguars,” Thompson told Auto Express. “I think reflecting on what’s happening around the world, I would love to do cars which are smaller, more efficient and have all the inherent values of a Jaguar, which are a beautiful thing to look at, with a fantastic interior, and are just great to drive.”

What do you make of the upcoming Jaguar J-Pace? Let us know in the comments section below… 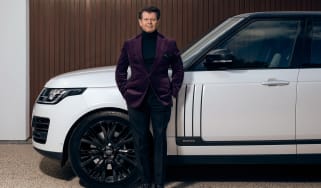 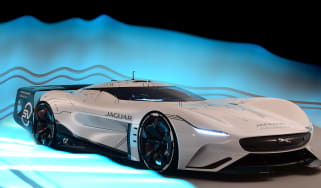 System from Jaguar Land Rover works similar to active noise cancelling on a pair of high-end headphones, to reduce wind and tyre noise