Lightweight Jaguar E-Type: everything you need to know

Six new Lightweight Jaguar E-Type cars are on the way, thanks to Jaguar's hertitage team 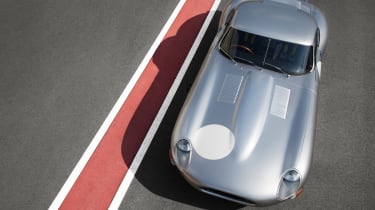 One of the most iconic cars ever produced has been given a new lease of life by Jaguar - the Jaguar E-Type. Six new all-aluminium Lightweight Jaguar E-Type cars will be hand-built and sold by Jaguar Heritage, part of JLR’s new Special Vehicle Operations division, responsible for creating halo vehicles and bespoke customer commissions. Each of the six E-Types represents one of the missing models from the allotted 18, which never made production back in 1963.

A prototype model dubbed Car Zero debuted at the Pebble Beach classic car show in California this week but will not carry one of the six Lightweight chassis numbers. Nevertheless, it remains identical, right down to the last nut and bolt, as to how the reborn E-Types will look.

• Jaguar E-Type: history of an icon

Each of the six, including Car Zero, has been built to the exact specification as the last Lightweight E-Type – No.12 – to leave the factory in 1964. Despite the 50 year gap and advancements in technology during that time, Jaguar will stick to the same materials and production techniques used to create the first batch of Lightweights. The reborn classics will even be assembled at the original home of the E-Type, Jaguar’s Browns Lane plant in Coventry. 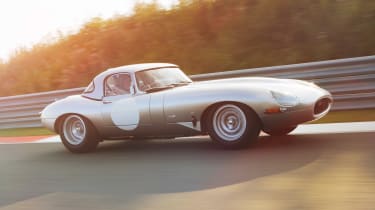 The all-aluminium bodyshell – which helped shed around 114kg in comparison to the standard E-Type – along with the other 230 individual components, will be digitally mapped to ensure unquestionable authenticity. Further aluminium components such as the bonnet, doors and bootlid further reduce weight, with an aluminium hardtop also fitted as standard.

Under the elongated bonnet, a highly developed version of Jaguar’s straight six XK engine will be fitted. The 3.8-litre engine chosen for the E-Types was the same engine that powered the D-Type to victory at Le Mans in 1957, with power now standing at around 340bhp. Yet, various mechanical tweaks for each of the six customers can make could see that figure increase or decrease. Carburettors or a fuel injected engine can be specified but a four-speed manual gearbox and limited slip differential are standard fit. 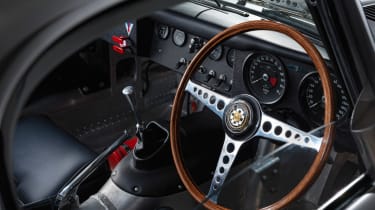 The modern day E-Types will be largely unchanged from those which were hand crafted 50 years earlier, with only larger front brakes being fitted as a safety precaution. In the name of weight saving, the same sparse interior, including the wood-trimmed steering wheel, will be carried over. Although Jaguar has prepared bespoke trim packages if buyers require something a little more luxurious.

Only six Lightweight E-Types will ever be built and Jaguar was reluctant to discuss the price tag placed on each the reborn classics. The British firm will approach potential customers who they think will best suit the brand, and with each of the six Lightweights suitable for FIA historic races, Jaguar is hopeful of finding customers who will take full advantage of the car’s racing pedigree rather than have it displayed on a plinth in a museum.