The rugged Jeep Gladiator pick-up launches in America late next year, before arriving in Europe in 2020 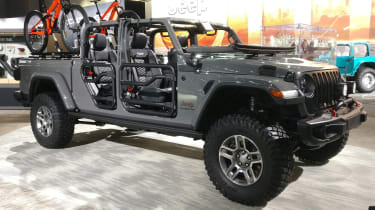 The fourth-generation Jeep Wrangler has spawned a pick-up bodied sibling in the form of the new Jeep Gladiator, revealed overnight at the Los Angeles Motor Show.

Presented exclusively as a double-cab pick-up truck, the Gladiator still uses a body-on-frame construction method but boasts a wheelbase 493mm longer than the Wrangler’s in order to accommodate a usefully sized pick-up bed. Overall, it’s 787mm longer than a four-door Wrangler. Both hard-top and soft top variants have been revealed.

Design wise, it quite obviously makes use of the Wrangler’s traditional cues, but with one or two unique tweaks. For instance, the grille slots at the front are a little bit wider to allow for greater airflow, and the nose itself is swept back ever so slightly more. 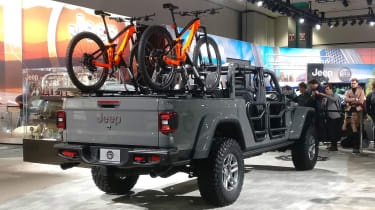 Sport, Sport S, Overland and rugged Rubicon models have been confirmed, with Overland and Rubicon Gladiators equipped the LED headlights and fog lamps as standard.

The utilitarian cabin is lifted wholesale from the Wrangler, with a 5.0-inch touchscreen display as standard. A larger 7.0-inch unit or an 8.4-inch unit are optional. Behind the front two seats, the rear bench is new and features more legroom than in the Wrangler. It can be folded completely flat to create a rear-cab cargo area.

Under the bonnet, Jeep has confirmed two engines for the US market. From launch, it’ll be available exclusively with a 3.6-litre V6 petrol developing 285bhp and 353Nm of torque. A six-speed manual gearbox is standard, with an eight-speed automatic on the options list. From 2020, a 260bhp 3.0-litre diesel will be offered, featuring the eight-speed automatic gearbox.

The same Command-Trac 4x4 system used on the Wrangler is employed on Sport and Overland models, with the more rugged Rock-Trak system featuring Jeep’s ‘4LO’ low-ratio drive and locking differentials equipped on the Gladiator Rubicon. 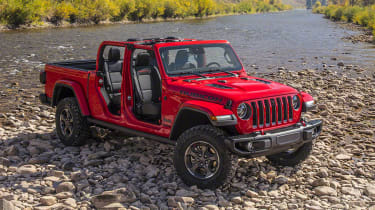 Rubicon models also come fitted with 33-inch off-road tyres as standard. Jeep says that the Gladiator can ford water 762mm in depth, while the braked towing capacity is rated at 3,470kg. The pick-up bed payload is rated at 726kg.

Production of the Gladiator will commence in the first half of 2019 at Jeep’s plant in Ohio. Jeep plans to launch the new pick-up truck in European, Middle Eastern and African markets from 2020 onwards. Whether Europe will include a UK launch remains unknown. 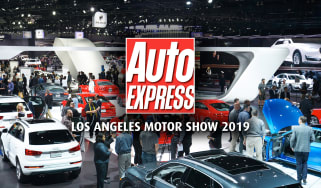 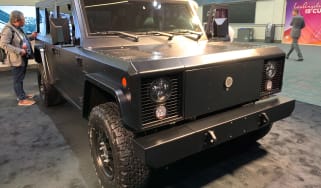