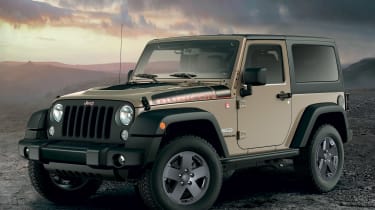 Jeep has revealed another limited edition off-roader for the UK market in the form of the Wrangler Rubicon Recon – a range topping £40,000 plus version of its utilitarian Wrangler 4x4.

The Rubicon Recon was revealed way back in March at the Geneva Motor Show, but Jeep UK has just confirmed its arrival in Britain. It’s not just a cosmetic makeover either – Jeep says that the Wrangler Rubicon Recon boasts additional off-road ability thanks to a string of new components.

Jeep has fitted the Wrangler Rubicon Recon with a stronger front axle, while the differentials are protected by more substantial cast metal covers.

On top of the tougher underpinnings the Wrangler Rubicon Recon gets 18-inch aluminium wheels painted with a low-gloss finish, while the dual-top roof is finished in black on both hardtop and soft-top models. Up front is a muscular looking dual-vented bonnet with black and red ‘Rubicon’ decals, and there’s also a black fuel filler cap and spare tyre cover. The car’s trademark ‘Trail Rated’ badges are painted a contrasting red. 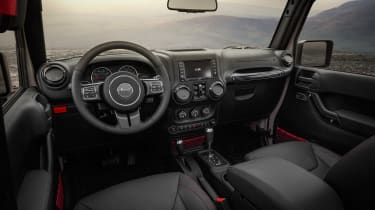 In the cabin the red and black theme continues – black leather heated seats gain red contrast stitching, while‘ Rubicon’ logos are also embroidered into them. Red accent netting on the doors and red seatbelts make the Wrangler Rubicon Recon stand out even more.

Under the bonnet sits a 3.6-litre V6 developing 280bhp, driving all four wheels through a five-speed automatic gearbox. Both two-door and longer wheelbase four-door versions of the new special edition Wrangler are available, which is priced from £40,050.

Is the Wrangler one of your top off-road choices? Let us know in the comments.