Kia Soul GT and convertible on the way

Sporty and convertible versions of the Kia Soul confirmed 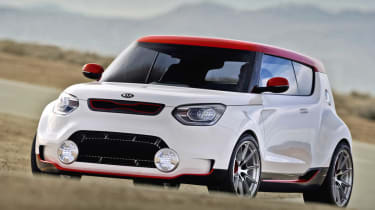 The all-new Kia Soul will make its world debut at the Detroit Motor Show in January.

But Kia is set to take its boxy supermini up a gear, with insider sources confirming the arrival of a high-performance GT model - aimed at bolstering the Soul’s following in Europe - as well as a convertible version, designed to continue the car’s runaway success in the US.

Kia has made no secret of its desire to build a more performance-focussed Soul variant, as shown with its Track’ster concept which debuted at this year’s Chicago Motor Show.

But as well as showing that the next-generation Soul will be a sensible evolution of today’s striking supermini, the Soul Track’ster concept introduces a three-door body style. The current Soul is a five-door only, but insiders have confirmed that design chief Peter Schreyer is keen to see a sporty three-door model added to the Soul line-up.

Under the skin, the new Soul will be based on the Rio and Venga underpinnings, but the boxy look will be retained. This is a bonus for hot hatch fans, as the squared-off front end gives plenty of space under the bonnet to allow the forthcoming Pro_cee’d GT’s 200bhp 1.6-litre turbo engine to be installed.

In addition to the extra power, the Soul GT would feature a bodykit inspired by the Track’ster, with wider wheelarches and a deep front splitter, and lowered suspension for more entertaining handling.

The Soul line-up could expand further to include a production version of the Soul’ster convertible concept, which was first shown at the Detroit Motor Show back in 2009.

Whereas the standard Soul has sold well in Kia’s home Asian markets, Europe and the US, the hot model would be targeted at Europe, as demand for such a car doesn’t really exist elsewhere.

Likewise, a drop-top Soul would be very much targeted at the US market, where the Soul has been a hit with new drivers, thanks to its unusual looks and competitive pricing. In the US, the Soul starts at just over £9,000 for a 1.6-litre petrol model.