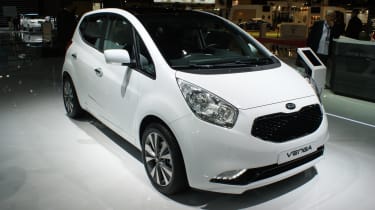 Kia has updated the Venga mini-MPV with a new look, updated interior and some added optional extras. It has been revealed today at the Paris Motor Show, ahead of going on sale in Europe early next year.

Changes to the exterior include a larger grille with repositioned badge, and a new lower front bumper that combines foglamps with new LED daytime running lights. New chrome trim sets the car apart at the rear, as do LED tail-light clusters, while there are also new alloy wheel designs. 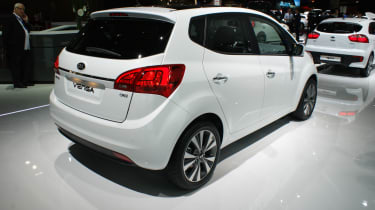 Efficiency tweaks have been made across the engine range to help the car meet Euro V emission standards. New stop-start tech means CO2 emissions for the 1.4-litre diesel drop from 119g/km to 114g/km.

The upgraded Venga, manufactured in Slovakia, is expected to go on sale in Europe in early 2015. Official pricing will be announced soon, although it's likely to remain similar to the current range, which starts at £13,095.