£1.6m, 760bhp Italian hypercar is all sold out, but here it is bringing the noise to the Nardo circuit in Italy

Lamborghini unveiled its exciting anniversary creation earlier this year, and the Centenario can now be seen lapping the Nardo circuit on video. The hypercar has a 760bhp V12, flamboyant styling and a £1.6m price tag.

Lamborghini developed the Centario to honour the 100th anniversary of its founder Feruccio Lamborghini's birth. The car made its debut at the 2016 Geneva Motor Show, and just 20 coupes and 20 roadster examples will be produced. If you have the reported £1.6 million needed to spend on one, bad luck - Lamborghini says they've all been sold in advance.You can watch the Centenario on track here: 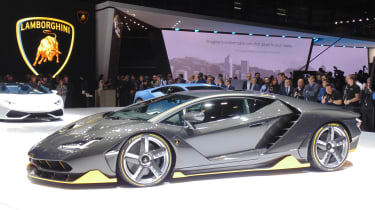 The styling takes Lambo's already flamboyant Aventador to another league of extreme. We'd expect nothing less from the Italian firm, with sharp creases, jagged edges and a super-low stance plus one of the wildest rear-ends we've seen on a production car.

The official stats comprise a 760bhp naturally aspirated 6.5-litre V12, which manages 0-62mph in just 2.8 seconds thanks to Lambo's four-wheel drive system, and a kerbweight of just 1250kg. Top speed is in excess of 217mph.

It gets an increased rev limit, up to a raucous 8,600rpm, while an Active rear wing combines with massive carbon-ceramic brakes to bring the Centenario from 186mph to a dead stop in just 290 metres.

The Centenario also comes with rear-wheel steering - unique to Lamborghini - and a power to weight ratio of 1.97kg per horsepower. That's thanks to a carbon fibre monocoque chassis, which keeps the hypercar nice and light. 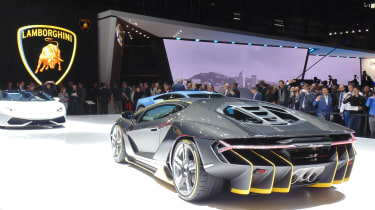 There's also a touchscreen infotainment system inside "with connected abilities", including Apple Carplay and social media apps. Sophisticated telemetry software will allow owners to check lap times and track G-Forces, although we doubt many of these will be leaving the safety of a warmed garage.

In an exclusive interview with Auto Express last year, then Lamborghini CEO Stephan Winkelmann said: “We will unveil a car in Geneva. In terms of renderings, it is known to the customers already.

“It is a car which is covering the best balance between tradition and innovation because we are speaking about performance, design, weight, aerodynamics and also the chassis in terms of adaptability control.

“You are familiar with our one-offs – it will be something like this, a coupe bodystyle. And it will initiate the celebration of the 100 years.”

“The car we will show will be a completely different design from both Huracán and Aventador.”

What do you think of the Lamborghini Centenario? Let us know in the comments section below...