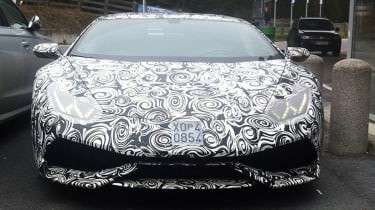 The first teaser of the all-new Lamborghini Gallardo replacement has been released.

Lamborghini has set up a website for the new V10-powered model, which will possibly called the Cabrera, at hexagonproject.com, where visitors can push a start button to hear the new car roar into life.

The new model is expected to replace the Gallardo in the middle of 2014.

The launch of this new website coincides with a brand new set of spy shots revealing a few more details about the styling of the car. The Lamborghini pictures show the new model is clearly inspired by the Aventador, featuring more angular lines, a slatted rear windscreen and a set of narrow taillights.

Judging by what we can see on hexagonproject.com the interior will get an Aventador-style makeover too – the push button start is identical to that seen on Lamborghini’s flagship model.

The newcomer is expected to share a platform with the next-generation Audi R8, so that means an aluminium spaceframe construction that should be far lighter than what lies underneath the Gallardo. The engine is expected to be a heavily modified version of the Gallardo’s 5.2-litre V10, tuned to put out around 600bhp.

With a new seven-speed dual-clutch gearbox replacing the clunky e-gear system, expect to see a 0-62mph time of just over three seconds and a top speed of well over 200mph.

Lamborghini hasn’t revealed any more official details but expect prices to kick off at around £165,000. Considering the timing of this teaser, it’s likely that we’ll see the wraps pulled off Lamborghini’s new supercar at the Geneva Motor Show in March 2014.