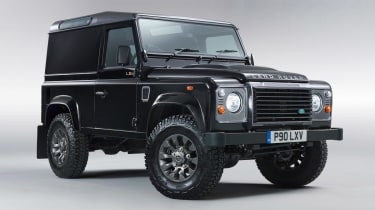 Today is the 65th anniversary of the start of Series 1 Land Rover production, and to celebrate the firm has announced a special edition Land Rover Defender LXV.

Taking its name from '65' in roman numerals, the Defender LXV has been unveiled at the start of a celebration event held at the Packington Estate near Land Rover’s Solihull factory.

In the UK, the LXV will be limited to just 65 units, and they’ll all be based on the two-door Defender 90 Hard Top model. As with the standard Defender 90, the LXV will be powered by a 2.2-litre diesel engine that develops 120bhp and 360Nm of torque. All cars come with a six-speed manual gearbox.

The interior boasts full leather seats with LXV-embossed front headrests and unique orange contrast stitching on the seats, steering wheel and centre cubby compartment. Finishing the look is a union flag decal on the rear of the Defender.

Land Rover has chosen the Packington Estate for its birthday celebration as it was the original test location for the 1947-48 Land Rover prototypes. The estate was used by Land Rover until the early 1970s, when the Range Rover was being developed.

The firm will also show off its latest models, including the new Range Rover Sport, its electric Defender and the forthcoming Evoque with a nine-speed gearbox.