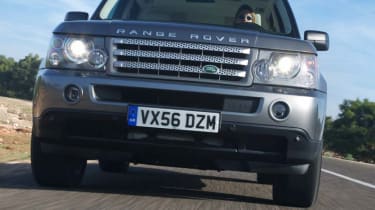 The 3.6-litre TDV8 can’t arrive a moment too soon for Range Rover Sport fans, who want the performance of the supercharged model without its high fuel consumption. While the gearbox is excellent, what’s really amazing is the exhaust note. We’ve driven petrol V8s that sound less purposeful.

For fans of serious 4x4s, there's nothing like the combination of a big off-roader powered by an even bigger diesel engine. That's because gutsy, low-revving performance means a V8 oil-burner will propel even the heaviest vehicle up the steepest slope, leaving petrol-powered alternatives strug-gling noisily with wheels spinning.

Although Land Rover's fresh 3.6-litre V8 unit was made available in the top-spec Range Rover last month, it's taken time for the company to turn its attention to the Sport. But now, fitted with the twin-turbocharged engine, it has never been more desirable.

Displaying all the urgency of the supercharged flagship, the newcomer still manages a respectable 25.5mpg. It also offers an enormous 640Nm of torque from 2,000rpm, with 500Nm of that available from 1,500rpm.

Capable of 0-60mph in 8.5 seconds, this diesel model is further improved by changes to the gearbox. A new Sport mode speeds up shifts, particularly when changing down a ratio. But the most impressive attribute of the V8-engined machine is the way in which all of this has been achieved without spoiling the character of the original car.

So while stylists have given the TDV8 its own look with a reworked front grille, changes to the interior - and more importantly, the chassis - have been kept to a minimum. The result is a vehicle that feels very stable, even on uneven roads. Only under heavy braking is the extra weight of the powerplant apparent; stop quickly and the steering loses some of its sharpness. But all of this is quickly forgotten when it comes to the engine note. By fine-tuning the exhausts, Land Rover has successfully eliminated most of the diesel unit's usually rough clatter.

In fact, it sounds so much like a petrol model, we had to check under the bonnet to be sure we were driving the right one! Luckily, to avoid any confusion at the pumps, Land Rover has developed a new top to the fuel filler which makes it impossible to put anything but derv in the tank.