The Range Rover Hybrid is powered by a 3.0-litre V6 turbodiesel and a 35kW electric motor and is capable of 44mpg 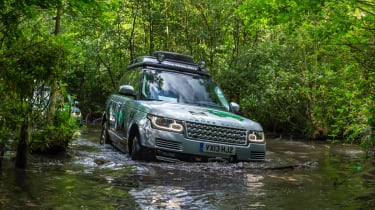 The Range Rover Hybrid is an impressive technical feat. Thanks to the clever control systems, the engine and electric motor work in almost perfect harmony to deliver a punchy drive on road and off it, as well as returning some decent gains in fuel economy, too. The small all-electric range and big price tag could hold it back, though, especially when the TDV6 is such a smooth performer.

The Range Rover Hybrid is Land Rover's first production hybrid – you’ll be able to buy one as soon as it’s launched at the Frankfurt Motor Show – but we’ve had an early drive in a prototype that’s about to set off on a gruelling 16,000km trip, tracing the route of the old Silk Route from the UK to India.

Despite adding around 120kg to the kerbweight, the hybrid Range Rover returns official claimed fuel economy figures of 44.1mpg and 169g/km of CO2, improving on the TDV6’s 37.7 and 196g/km. But how does it effect the distinctive Range Rover driving experience?

The interior is as plush and opulent as ever, with the only changes being a small button on the centre console to activate EV mode, and a new dial on the TFT screen that shows you how much the brakes are regenerating power and the battery’s reserves. Besides some exterior badges and a new 20-inch aero-design alloy wheel (not fitted to this car), you’ll be hard pressed to tell the difference from the outside, too.

Rotate the gear controller into D, and, if the battery has enough power, then a light squeeze of the throttle will have you gliding forwards in near silence, powered solely by the electric motor. The engine is extremely well insulated, and very refined, so it’s hard to tell when the TDV6 fires up – in mixed driving, Land Rover says the engine is off around 25 per cent of the time. Land Rover claims up to a mile of all-electric range in EV mode, but you have to be travelling slower than 30mph and have a fully charged battery.

The hybrid system is controlled by a patented electronic system called Vehicle Supervisory Control that constantly measures and attempts to predict how you are driving, and selects the most efficient source of power accordingly. It works extremely smoothly, so much so, that you can barely tell what combination of sources is powering the car, making the drive similar to the regular V6, but with a bit more punch.

That’s especially noticeable off the line – there is extra sprightliness, as the electric motor adds 170Nm of peak torque to the engine’s 600Nm. However, select Sport mode, which gives TDV8 levels of acceleration, and there’s noticeable jolt from the transmission as the clutches each side of the electric motor jump into action to deliver maximum thrust to the wheels.

The battery itself discharges very quickly, particularly if you have the climate control on. The system now uses an electric compressor so the cabin stays cool when the engine is off, but it uses juice quickly – so much so that you can watch the battery indicator tick down like a fuel gauge with a big hole in the tank.

You can recharge the battery quickly though. Slow from the motorway limit to a standstill and you’ll pretty much top the battery back up through the regeneration system. Or, if you want to arrive at your destination in the total refinement and stealthy quiet of electric mode, you can switch off the stop-start or rev the engine while the car is in neutral to charge up the battery.

As the regeneration is nowhere near as aggressive as in other hybrids, the brakes are nice and linear. However, the lack of regen does help add to the feeling that the hybrid system has been designed to boost economy figures and give good initial response, but ultimately not to interfere too much with the way the Range Rover feels when you drive it.

The liquid-cooled lithium-ion battery and its control unit sit under the right-hand front seat and are protected by a boron steel cover that can withstand hard off-road abuse. They also don’t affect the 900mm wading depth, so there are no compromises off-road, either. In fact, it makes it better.

Although stop-start and EV mode are disabled when you activate the low range setting for the gearbox, or put the air suspension into its higher setting, the motor helps give extra linearity to the power delivery and crisper throttle response. This removes the effect of turbo lag, and makes it very easy to judge traction and just how much throttle you need to apply in order to climb a steep slope.

The extra off-road ability and impressive fuel economy are extra strings to the Range Rover’s bow, so Land Rover has decided to market the hybrid as a flagship model, priced on a par with the £98,430 supercharged V8. The TDV6 on which it's based starts at £71,310, while the TDV8, whose performance the hybrid matches, kicks off at £78,120.

It has no clear idea how many it will shift, but is aiming for between 5 and 10 per cent of total Range Rover sales in Europe. Land Rover decided to target the mature European market, rather than the US, where the car won't be sold, at least initially. The price does seem like a big ask, but for the few with the cash and the desire to claim they have the most high-tech Range Rover on their drive, it’s a well engineered and executed technology showcase.