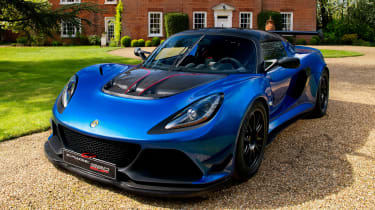 Lotus has revealed a new track biased Exige, limited to 60 units worldwide and priced from £83,000 in the UK with order books open now.

Called the Exige Cup 380, it’s a more hardcore version of the Exige Sport 380, though it runs the same supercharged, 375bhp V6 engine as its sibling. Power is delivered to the rear wheels through a six-speed manual gearbox. 0-60mph is dealt with in 3.4 seconds, while top speed comes in at 175mph.

It’s also only a little lighter than the Sport 380 at 1,057kg dry. Instead, the main changes are aerodynamic - the Cup 380 boasts new bodywork tweaks developed with wind tunnel assistance to deliver up to 200kg of downforce at its 175mph top speed. 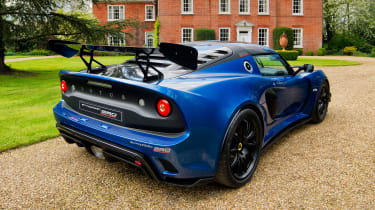 New front louvers work the airflow in the front wheel-arches, while cut-outs behind the rear wheels work with aero-blades flanking the rear diffuser. A huge rear wing sits at the back too, the push the rear axle into the tarmac. The aero changes have even gone so far as a redesigned windscreen wiper.

In tandem with the new levels of downforce, mechanical grip should be improved too – the Cup 380 comes with 20mm wider rear tyres.

A total of 6.5kg is saved compared to the Sport 380 model. As ever, much of the bodywork is constructed from carbon-fibre, the key difference being the new one-piece tailgate made from the composite and the removal of gas struts to prop it up.

Inside, the cabin is finished with visible carbon weave panels and carbon-fibre race seats and doorsills. More optional carbon elements can reduce a further 1kg from the overall weight, and the instrument panel has been slightly redesigned with new dials.

What do you think of the Lotus Exige Cup 380? Let us know in the comments! 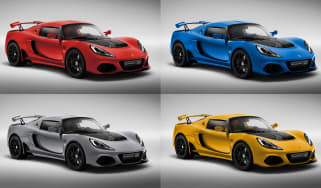