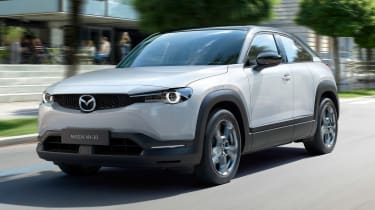 This is the Mazda MX-30. It’s the Japanese brand’s first production-ready pure-electric vehicle, which will go on sale in early 2021 in a limited-run, First Edition trim-level. Prices will start from £27,495 (including the government’s £3,000 plug-in vehicle grant) and UK production will be limited to just 500 units.

The MX-30’s design echoes that of Mazda’s other SUVs, such as the CX-30, although this electrified offering has a different grille and a squarer shoulder line at the top of the wheel arches. There’s also the same reverse-hinged rear doors that featured on the RX-8 sports car, which should help to increase the opening ahead of the rear wheels – although they also mean back-seat passengers won’t be able to get out without the front door being opened.

Mazda’s launch edition MX-30 will be powered by a synchronous AC electric motor, fed by a 35.5kWh lithium-ion battery pack. The powertrain has an output of 141bhp and 265Nm of torque – and Mazda claims the First Edition model will have a maximum range of 124 miles.

Performance figures are yet to be confirmed but, given the size and weight of the SUV (and the output of its electric powertrain), we’re expecting a 0–62mph time of between eight and 10 seconds and a top speed of around 100mph. 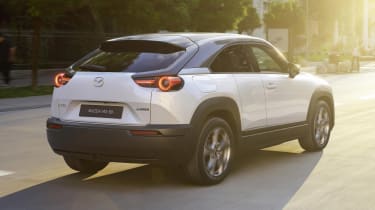 While the First Edition model will only be available as a pure-electric vehicle, the regular production variant will be offered with a choice of three eco-friendly powertrains. The pure electric model will be joined by a range-extender version, which uses the same motor and 35.5kWh battery pack, but will add a fuel tank and the rotary engine. Finally there’s scope for a closed hybrid that has a larger fuel tank again, but a smaller battery designed to support short bursts of pure-electric running.

Both the pure-electric and range-extender variants will offer support for 50kW fast-charging, which allows the battery pack to recover an 80 per cent charge in as little as 30 minutes. A Type 2 mode 3 charging cable will also be included, allowing buyers to recharge their vehicles using both domestic and public charging points.

The MX-30’s cabin is trimmed in a blend of fabric and leatherette – and, in a nod to Mazda’s humble beginnings as a cork manufacturer, the EV’s storage trays and door handles are lined in sustainable cork, which has been harvested from the bark of trees that have fallen naturally. The SUV’s air conditioning system is controlled by a seven-inch touchscreen panel set into the lower dashboard.

As it’s designed to flaunt the MX-30’s technology, the First Edition model will come with plenty of standard equipment. Buyers get a leather steering wheel, an eight-way electrically adjustable driver’s seat, a seven-inch digital instrument binnacle and a high-mounted infotainment system, which is controlled by a rotary knob on the centre console.

We drive the MX-30 prototype

Mazda’s prototype for the MX-30 features a CX-30 bodyshell on top – but underneath, it’s a good indicator of how some of the car’s novel features will work in practice. And we’ve been able to have a 30-mile run in the car.

The first thing you realise when you pull away is that the MX-30 feels more like a conventionally powered car than an electric one. The power and torque outputs are relatively modest in a car of this size. So while the initial throttle response is there, you simply don’t get that hot hatch-beating surge that comes in EVs like the BMW i3. 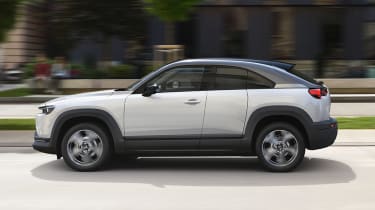 There’s noise, too – a faint bit of electric motor whine from deep down below you, but also Mazda’s EV Sound, which uses synthesized audio to represent how much of the car’s torque you’re currently calling upon. It’s an interesting noise more than an appealing one – a bit like a distant electric guitar – but while we’d be tempted to switch it off around town, we can see how it could add a bit of extra involvement if you’re getting hasty along a B-road.

The standout quality is the Mazda’s brake pedal modulation. The transition between braking energy regeneration and the conventional pads and discs is exceptional, and perhaps the best of any EV we’ve yet sampled.

More controversially, you’ll be forced to use that left-hand pedal, because the car won’t bring itself to a halt on energy recuperation alone

The rest of the package is typical Mazda, with a ride that borders on firm but just about gets away with it. We’ll have to wait to try the properly bodied model before making a call on refinement at speed, though.

So the MX-30 feels much like a conventional car in lots of ways. That, in the end, could be one of its trump cards.

What are the best electric cars on sale? Head over to our sister site DrivingElectric to find out...