The most extreme version of the AMG GT has been spotted undergoing development at the Green Hell, ahead of its debut later this year 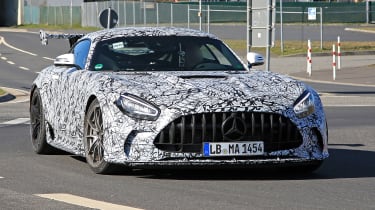 Our spy photographers have caught the new Mercedes AMG GT R Black Series on camera during its testing programme at the Nurburgring. It draws inspiration from the company’s AMG GT GT3 racer and will be the most extreme road-going version of the firm’s Porsche 911 rival.

The suspension will also be lowered by several millimetres and it’ll be set up with stiffer springs all round and slightly more camber for the front wheels. To take advantage of the uprated chassis, the production car will also receive a set of wider alloy wheels wrapped in Michelin Pilot Sport Cup 2 tyres.

It’ll be powered by a re-tuned version of the GT’s twin-turbocharged 4.0-litre V8 engine, which should feature forged internals, new camshafts and an upgraded engine management system. We also expect that the GT R Black Series will come with an upgraded pair of turbochargers and new intake system. 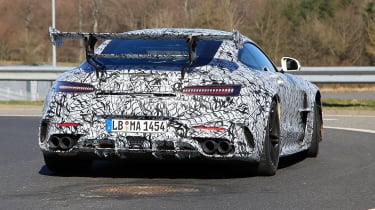 Power output is expected to be in excess of 600bhp, a substantial increase over the current GT flagship, the 573bhp GT R Pro. However, torque is unlikely to increase over that car’s 700Nm figure.

Inside, the AMG GT R Black Series will be largely similar to the AMG GT R Pro, with a pair of heavily bolstered, carbon-fibre-backed bucket seats and a sports steering wheel. As with the GT R Pro, Mercedes-AMG’s track package should be offered as an optional extra, adding a full roll-cage, a safety harness and a fire extinguisher.

As is traditional with Mercedes Black Series models, this highly-tuned GT R is likely to mark the end of the coupe’s lifespan. We expect it will remain in production until 2022 before being replaced by an-all new model.

What do you make of the Mercedes-AMG GT R Black Series? Let us know in the comments section below… 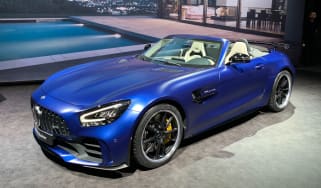 The range topping Mercedes-AMG GT R convertible will arrive in the UK this autumn, with prices starting from £178,675