The Mercedes C-Class Coupe and Cabrio have been treated to the same mid-life updates as the saloon and estate, with new engines and tech 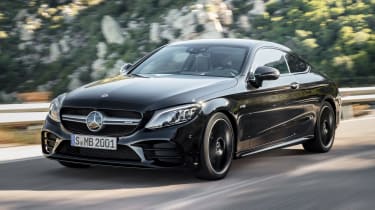 The C 200 Coupé can be had with 4MATIC all-wheel drive, while the 251bhp C 300 four-cylinder is also exclusive to the hard-top model.

From launch, the C-Class Coupe and Cabrio will be available with three engines. The entry-level C 200 comes with a 1.5-litre four-cylinder engine and is available with or without 4MATIC all-wheel drive. The sole diesel is the popular C 220 d, while the AMG C 43 gets a 23bhp boost. There’s no word on a revised version of the AMG 63, though that’s expected to arrive in the not too distant future. 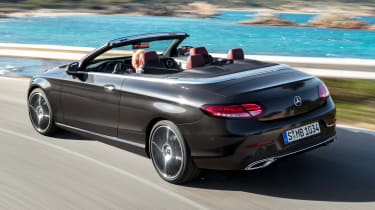 The C 200 gets a new 48v mild-hybrid system called EQ Boost. The set-up can assist the 181bhp petrol engine with an additional 14bhp, supposedly eliminating turbo lag at low revs. During deceleration, the alternator recuperates kinetic energy to charge the battery, while also offering a function that switches the engine off when coasting.

The new C 220 d also gets an extra 23bhp over the outgoing car, and Mercedes claims it’s more economical than before. The firm is yet to announce official figures, but expect a small improvement on the outgoing cars’ 68.9mpg (Coupe) and 62.8mpg (Cabrio).

Merc is dropping the Sport trim from the UK line-up in 2018, thanks to the fact AMG Line has proved so popular since the car first went on sale. The C-Class’s kit list has improved, however, with every Coupe and Cabriolet now featuring LED lights as standard. The front end has been subtly tweaked, while all two-door models continue to feature a unique chrome radiator grille. Two new colours – Mojave Silver and Graphie Grey – have been added. 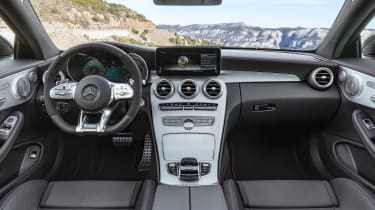 Inside, the sleek models are now available with an optional digital instrument display. The 12.3-inch screen replaces the standard car’s analogue dials, merging with the 10.25-inch central screen. Basic cars get a seven-inch infotainment display. Like the E-Class, the updated C gets touch sensitive buttons on the steering wheel, too, allowing the driver to use smartphone-style swipes to control the car’s functions and trip computer.

Improved camera and radar systems allow the C-Class Coupe and Cabriolet to see up to 500m ahead, 40m to the side and 80m to the rear. Active Distance Control DISTRONIC uses map data to adjust the car’s speed, too, actively reacting to forthcoming traffic situations and road layouts.

Prices and specs for the new two-door C-Class range will be announced next month, although due to the fact there’s no Sport spec, prices are likely to jump over the current model’s £32,325 starting price. That considered, a C 200 AMG Line Coupe is likely to cost around £34,000, with a convertible version commanding a near-£5,000 premium.

Take a look at the facelifted Mercedes C-Class saloon and estate...