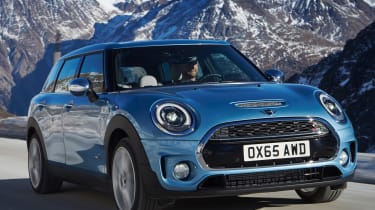 The MINI Clubman ALL4 has been revealed, bringing four-wheel drive into the brand's practical VW Golf rival for the first time. It will be available on Cooper S and Cooper SD models from April, costing from £24,305.

Previously the only MINI model with the ALL4 system was the Countryman, and this new smaller model marks the first time four-wheel drive has been offered on an Oxford-built MINI.

The 4x4 system is electronically controlled, and can change the amount of torque being sent to each axle depending on where it's needed the most. MINI says it can increase traction when accelerating out of bends thanks to an electronic differential lock. 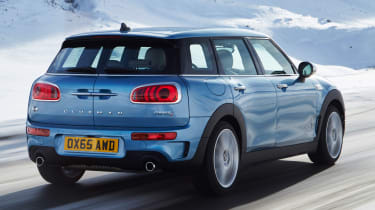 On the MINI Cooper S version the ALL4 uses the same 189bhp 2.0-litre four-cylinder petrol as the front-wheel drive model, with either a six-speed manual or an eight-speed automatic gearbox. This means it returns 40.9mpg and emits 159g/km (44.8mpg and 146g/km for the auto), which is about 5mpg and 2g/km worse than the standard model.

The Cooper SD Clubman with four-wheel drive is much more economical, with its 187bhp diesel engine and standard 8-speed automatic gearbox returning 58.9mpg and emitting 126g/km - compared with 65.7mpg and 114g/km in the standard version. There's no manual option for the diesel, though. 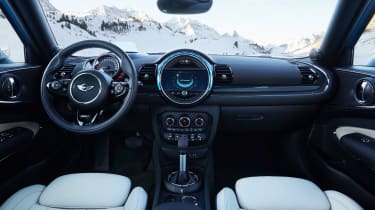 Despite the extra weight from the 4x4 system the ALL4 makes the Clubman faster from 0-62mph by 0.2 seconds - down to 7 seconds on the manual Cooper S model and 6.9 seconds on the automatic. The diesel Cooper SD version improves from 7.4 seconds to 7.2 seconds.

Sat-nav comes as standard on the ALL4 versions, as well as the MINI Excitement Package, which includes extra interior lighting and a logo projection underneath the door when you open it to get in or out.

Do you think the MINI Clubman needs four-wheel drive? Let us know below...

The MINI Clubman is a fun, small estate that's well-built and powered by a great range of engines – but it's not that practical