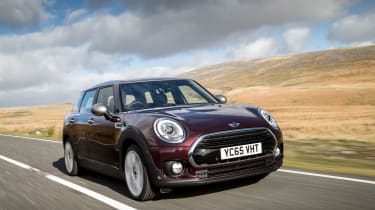 As a quirky alternative to more conventional family hatchbacks, the new MINI Clubman works wonders. It’s infinitely more spacious and versatile than the old one, ensuring it is far more likely to be on the radar of prospective family buyers. Thankfully, it’s also retained its playful character, which the majority of conventional hatches sorely lack. Add in the impressive economy and low running costs and the Clubman could actually make a lot of sense to a lot of people.

The Clubman name first appeared back in 1969. BMW reimagined it in 2007 with a similarly boxy shape, high roofline and barn-style doors - marketing it as a MINI for those with growing families.

But that never really worked. It was too small, cramped and compromised. MINI says it’s rectified that with this new one, which is not only bigger on the outside, but also significantly roomier on the inside.

This is no longer just a lardy MINI hatch, but instead a rival for the Audi A3, Mercedes A-Class and Volvo V40. There’s a sizeable 360-litre boot behind the rear seats, and folding them down frees up 1,250 litres – just 20 litres less than you’ll find in a VW Golf. 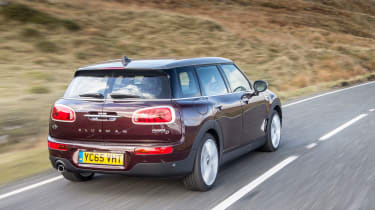 Up front, MINI’s installed a new centre console with a pair of cup-holders, a decent armrest and the familiar iDrive controller. The electronic handbrake frees up yet more space, and there’s even a pair of door bins big enough for a one-litre bottle of water. Standard kit has grown, too, with all cars featuring sat-nav, alloy wheels, cruise control and keyless go.

MINI hasn’t lost its flair, either. The big red starter button has been carried over from the hatch and sits nestled between the retro toggle switches, while ambient lighting has been cleverly installed in the door panels.

The dash design remains quirky, too, with a colour-coded ring and chrome strip wrapping the lower section of the dash. The large central display comes as standard, too. You’ll find plenty of room in the rear, and while it falls a little short of the class best, there’s enough head and leg space for adults to sit comfortably on longer journeys. 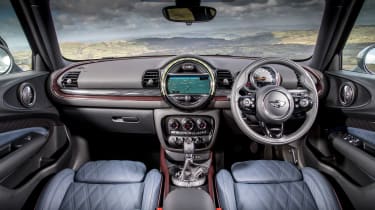 Thankfully, MINI has done away with the novelty rear-hinged Clubdoor and replaced it with two proper doors, which now open wide enough to fit a child seat in the back. The middle seat is a bit of a token gesture, though, and is only really usable on short trips. That said, the new Clubman is a great long-distance cruiser. We drove our Cooper D test car back to the UK from Spain, and were impressed with its refinement and impeccable motorway manners.

Wind noise is a slight issue thanks to the upright windscreen, but the engine is quiet. However, road noise is an issue with 18-inch wheels, and we guess that it would be far quieter on 17s. And while the barn doors look good, they can obscure your view out the back. Stylish? Perhaps. Practical? We’re not so sure.

It’s a shame, actually, as the visibility is generally strong, with the large rear windows offering a great view over your shoulder when changing lanes. It’s still a fairly compact car, too, feeling easy to manoeuvre around town and fun on a stretch of twisting country road. The Clubman hasn’t lost any of its playful character in this most recent reinvention, and despite its bloated body, it can still put a smile on your face when you’re in the mood. 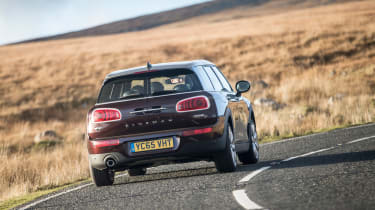 Admittedly, it’s not quite as sharp as a three or five-door hatch, but the steering is well weighted and the gearshift is short and sweet. We’ve already tested the petrol-powered Cooper S, but this Cooper D felt just as fun and even faster in gear thanks to its superior torque figure.

It’s also the most economical Clubman on sale, and will return as much as 68.9mpg – which is considerably more than you’ll get from a Cooper S (45.6mpg). It’ll cost just £20 per year to tax, too, whereas the petrol car will set you back between £130 and £145 depending on whether you go for the manual or more frugal auto. MINI is also looking to expand the Clubman range with a hot John Cooper Works version on the way, too.