The new MINI Clubman John Cooper Works boasts 302bhp, but what’s it like from behind the wheel? 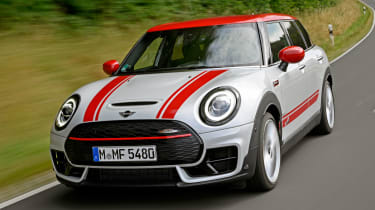 Fast, fun and full of character, the MINI Clubman John Cooper Works finally offers buyers a unique take on the fast estate car theme. It’s not without drawbacks, though, so to some the Volkswagen Golf R will remain a more accomplished all-rounder. If - and it’s a big if - you can live with the harsh ride, and if you can put up with a fairly measly boot capacity, then the Clubman puts a strong case forward for being one of the most entertaining estate cars money can buy.

It’s hard not to love a hot, affordable estate, but it’s a corner of the market that the Volkswagen Golf R has pretty much sewn up for itself in recent years. Capable though it is, to some it might just seem a little too clinical.

If you fall into that camp, MINI might just have created the perfect alternative. This is the Clubman John Cooper Works: a hot wagon that’s got character to match its punch.

So how hot is it? Power comes from the same 2.0-lite four-cylinder turbo that drives the new BMW M135i. That means 302bhp and 450Nm - proper hot hatch numbers. The Clubman joins the new Countryman John Cooper Works, which uses the same engine, as the most powerful production MINI ever. 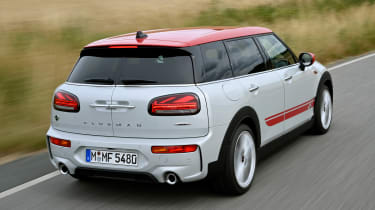 It’s one of the fastest, too. Engage the launch control system, and 62mph from rest is just a 4.9-second mash of the throttle pedal away. That figure, like the 155mph top speed, is an absolute match of the Golf R Estate, and 1.4 seconds quicker than the previous Clubman JCW.

To cope with all of that shove, the chassis receives various upgrades. The front camber settings, springs and dampers - passive as standard, switchable units are optional - feature unique tunes. The four wheel drive system gets a mechanical locking differential at the front and an electronic diff at the rear, and up to half of the torque can be sent rearwards, depending on conditions.

But what does all this mean out on the road? Firm, is what first springs to mind; the ride comfort, though refined beyond the previous JCW, is still very hard. If you’re used to a full-blown hot hatch like a RenaultSport Megane, it’s okay, but those coming from a Golf R might find it a little bit tiring.

Fortunately things improve at speed, and which point the chassis comes to life. The trade off of that hard ride is tight body control and a more playful balance that you’ll get from a Golf. Traction on corner exit, at least in the dry, is unshakeable, and the mechanical differential claws the inside front wheel into the tarmac. The brakes, measuring 360mm front and 330mm rear, manage to contain the 1,550kg kerb weight. 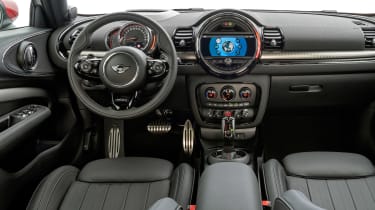 The engine itself sounds great, particularly in its most antisocial Sport mode. The linear shove gives almost deceptively quick straight line speed, though the kick in the back from every full-bore upshift of the eight-speed auto gearbox adds to the drama.

Of course, the aesthetics haven't been forgotten either. The JCW gets a gaping front bumper, a subtle rear wing, rear diffuser and mirror caps specific to the JCW; all of which aim to improve aerodynamic efficiency. There’s a choice of 18 or 19 inch wheels, and around the back, there’s a pair of fat exhaust tips. And if you’re not convinced by those bright red contrasting paint details, don’t worry - they’re optional. Inside, the John Cooper Works features sports seats, red contrasting stitching and black headlining.

Prices start from £34,250 which, when put alongside a Golf R, is very competitive. The Golf is more spacious inside though (particularly the boot, where the MINI’s 360 litres seems meagre beside the VW’s 606) but the MINI fights back by simply being more fun. And that surely counts for something in a performance car.