The MINI Clubman John Cooper Works now has ALL4 four-wheel-drive and 228bhp. Enough to challenge the hot hatch hierachy? 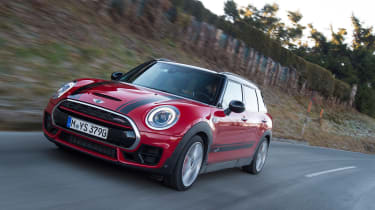 Ultimately, the new MINI JCW Clubman suffers at the hands of its super-talented rivals. A Ford Focus RS is infinitely more rewarding to drive, while a VW Golf R is easier to live with day to day. Unlike the smaller JCW hatch, the Clubman has to contend with its portly kerbweight, feeling less agile and not as fast. If you simply have to have a fast MINI with room for five, then save some cash and opt for a standard Cooper S.

The letters JCW have long been synonymous with MINI’s most extreme models. They represent the best of the brand’s go-faster know how, sharpening the already entertaining Cooper S variants with various mechanical and aesthetic upgrades.

Over the past decade we’ve seen John Cooper Works versions of everything from the standard three-door hatch, to the lairy two-seat Roadster and jacked-up Countryman. But now MINI has injected its VW Golf-rivalling second-generation Clubman with some JCW magic – and we’ve driven it for the first time.

Unlike the old model, the new car has been fitted with MINI’s ALL4 four-wheel drive system. It’s the same part-time setup as found on other MINI models, meaning most the time the JCW runs using only its front wheels. 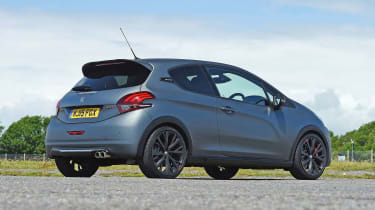 The pumped-up Clubman comes with a six-speed manual gearbox, while the familiar eight-speed auto tested here is a £1,600 option. It lifts the JCW hatchback’s 2.0-litre turbo engine unchanged – meaning 228bhp and 350Nm of torque. In fact, it manages an identical 0-62mph sprint of 6.3 seconds, too.

However, on the road, the 1,550kg Clubman feels lethargic. Where the three-door is agile and playful, the estate is more reluctant to show its wild side. Grip is good, but the steering isn’t as sweet as in the hatch, either. Plant your right foot and it builds speed effectively, but it never feels fast – allowing you to watch the revs rise without any real haste. It’s the same problem we found in the standard Cooper S ALL4, in fact, but we expect things would improve with a manual box.

Like in other MINIs, there are three drive modes: Eco, Mid and Sport. Using the most aggressive settings sharpens the throttle response, weights up the steering and turns the exhaust up a notch. The exhaust offers the biggest transformation, turning the Clubman from a humdrum Golf-rival to a boisterous hot hatch. It’s a familiar noise – popping and cracking every time you lift from the throttle – and allows the 2.0-litre turbo to remain one of the most characterful four-cylinders on sale.

Unfortunately, our twisty Alpine drive highlighted failings in the car’s Brembo brake setup. While they felt sharp enough on flatter sections, on the lengthy downhill stretches the JCW’s four-piston callipers didn’t offer sufficient bite. As a result, a VW Golf R would leave it standing through a series of tight bends.

The ride disappoints, too. Even on smooth Austrian motorways, the JCW sought out even the smallest imperfections in the tarmac. It’s stable and secure at high speeds, but potholes send crashes through the chassis – and it’s only likely to get worse on rutted UK roads. The figure-hugging sports seats are comfortable, though, and the cabin offers all the usual MINI luxuries. 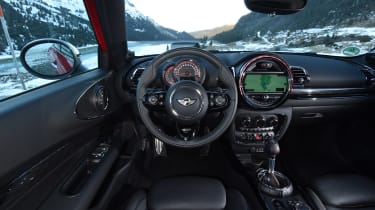 All cars come with sat-nav, stainless steel pedals and special sports seats. The rest of the interior is lifted from the Cooper S almost unchanged, however, with the same intuitive infotainment system, ambient lighting and retro toggle switches on the dash. MINI will boast about the sub-£30k starting price, but in reality, few cars will leave the factory without options – pushing it clear of much faster rivals such as the Golf and Focus RS.

Externally, the changes are subtle, mimicking the smaller three-door JCW. Each car gets wider bumpers and an aggressive bodykit, and the wheels are exclusive to the JCW, too. Look closely and you’ll notice the upgraded exhaust and special badges as well.