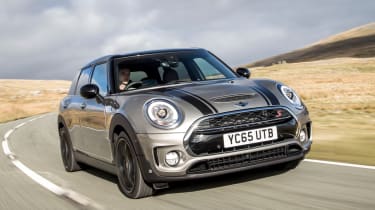 While lesser versions of the MINI Clubman offer both refinement and a fun drive, the Cooper S ALL4 Auto is a bit of a disappointment. It lacks some of the driving sparkle that manual variants offer, and doesn’t sound or feel as fast as you might hope, given the penalties in price and fuel economy. If you must have an all-wheel-drive Clubman, go for the diesel – but for most of the year, it’s still a bit of a false economy.

MINI purists may have struggled to warm to this second-generation Clubman, but the small estate has taken on a new level of maturity that allows it to challenge the accomplished German establishment. However, to really compete, MINI needs to further explore the niches that rivals like the Mercedes A-Class and Audi A3 are offering – which is why you can now buy a Clubman with all-wheel drive.

We’ve already driven the Clubman ALL4 in diesel Cooper SD form and concluded that while it is very competent, it demands sacrifices in price and fuel economy that mean most people will be better off with the standard car. Here, we’re sampling the system with petrol power on UK roads, which also gives us a chance to try the hot Cooper S ALL4 model for the first time.

Like the Cooper SD, the only thing that distinguishes this Cooper S from the front-wheel-drive model is the new ‘ALL4’ badging on the body. Inside, there’s absolutely nothing to mark it out, which is how it should be. The Clubman clearly isn’t about off-road prowess; more about security and stability in adverse weather, so there’s no need for it to shout about its four-wheel-drive underpinnings. What you’re left with is the same well built, if slightly fussy, cabin. The exterior is similarly divisive, of course, but there’s no denying it offers plenty of personality and character. 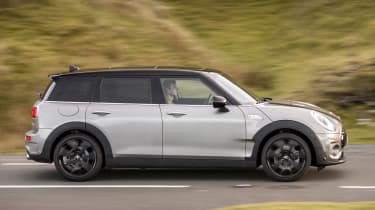 The ALL4 all-wheel-drive system isn’t a new concept to MINI, as the outgoing Countryman and now defunct Paceman have used it for a number of years. It’s an ‘on demand’ system rather than a permanent one, borrowed from BMW’s xDrive set-up, and allows the car to remain in front-wheel-drive mode most of the time.

When it senses a loss in traction, it can recouple the rear wheels almost instantly to pull you out of sticky situations. With torque vectoring – which brakes individual wheels – and an electronic differential lock, it’s even as sophisticated as Audi’s venerable quattro system. Pity that all this cleverness adds around 60kg to a car that’s already on the portly side. Our model weighed in at 1,535kg – hardly ‘mini’.

Still, with the same 189bhp 2.0-litre turbocharged petrol engine as the normal Cooper S hatch, it should have enough grunt to overcome that weight. The S is also available with a manual gearbox, but our car featured the same eight-speed automatic as the diesel we tried previously. A total of 300Nm of torque ensures it feels urgent enough in the mid-range, while the extra traction means the ALL4 is two-tenths faster from 0-62mph than the standard car.

Yet unlike the regular MINI Cooper S, the Clubman never really feels as fast as you might expect. Part of that is due to the eight-speed automatic gearbox; it’s smooth around town, but the linear power delivery dilutes the feeling of acceleration. Plus, the petrol engine’s sound is a touch subdued and strained compared with the rorty note offered on the hatchback. We suspect that a manual gearbox would be a better fit, yet we’d be surprised if it was any more enjoyable in the real world than a cheaper Cooper with the sweet three-cylinder turbo. 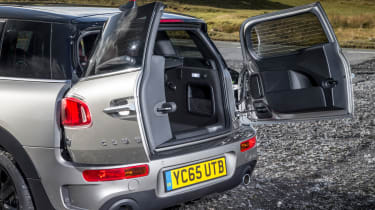 As we found with the diesel, dry roads meant the ALL4 system couldn’t be shown in its best light. The extra weight has no immediate effect on the handling, and for the most part, the Clubman ALL4 feels as agile and composed as the regular car.

Push really hard and you’ll feel the all-wheel drive and torque vectoring system start to tug you into bends more surefootedly, but most of the time you would struggle to tell the difference.

Given that the Cooper S ALL4 is even thirstier than the standard car (44.8mpg vs 48.7mpg) and you have to pay £1,400 for the privilege, we’d advise spending the extra on MINI’s all-important Chili Pack, which adds items such as part-leather seats, parking sensors and LED lights.