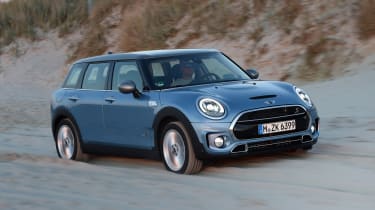 Without a doubt, the addition of four-wheel drive as an option strengthens the Clubman’s appeal. Many competitors now offer the system, and the extra stability and grip it adds improves the MINI estate’s already-strong recipe. We’ll have to sample the car on UK roads to see if it’s really worth the extra money, however – and we suspect that the premium price and fuel efficiency penalty may be a bit too much for some.

MINI isn’t known for its four-wheel-drive cars; its ALL4 system was previously reserved for its Countryman and Paceman crossovers. But now the bigger, more mature and versatile MINI Clubman is available with the set-up for the very first time, too.

ALL4 is an intelligent system rather than a permanent one, so the Clubman remains front-driven until slip is detected, at which point it can recouple the rear wheels instantly. It also features torque vectoring – so it can brake or send power to individual wheels – and an electronic diff lock to boost traction out of bends. All that adds around 60kg to the standard Clubman’s kerbweight.

Other than small badges on the front doors, there is nothing on the exterior or in the cabin to mark out the ALL4 from a front-driven Clubman. The system can only be fitted to Cooper S and SD models; we tested the latter, and it’s easy to see why it’s set to be the more popular option. The bone-dry and congested roads around Hamburg weren’t the ideal place to test the system, although it isn’t solely about improved ability in adverse conditions. The ALL4 Cooper SD shaves two-tenths off the standard SD’s 0-62mph time, taking a brisk 7.2 seconds, with hard acceleration in the lower gears not affecting traction at all.

That’s not to say it’s dull, however. The extra weight doesn’t impact on the handling, and the Clubman maintains the standard car’s agility but with an added layer of surefootedness. Understeer is kept well in check, and if you concentrate you can just about feel the effect of the electronic diff coming out of tight corners. It’s not as much fun to drive as the regular MINI hatch, however and on dry roads most buyers wouldn't notice the difference over a front-wheel drive Clubman. 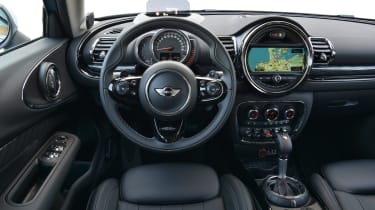 The 2.0-litre diesel is as strong and flexible as ever. It’s vocal, but doesn’t sound bad and selecting Sport mode brings a bassier (if artificial) rumble into the cabin. Fuel economy with the ALL4 system suffers, though, dropping to a claimed 58.9mpg – the two-wheel-drive car promises 65.7mpg.

The ALL4’s biggest problem is its price tag. Four-wheel drive adds £1,300 to the cost of the Clubman SD auto, but once you’ve specced the essential Chili Pack it totals £30,000-plus. Having said that, an equivalent Audi A3 quattro or BMW 1 Series xDrive both come in at a similar level.