New Black Pack adds extra kit and styling tweaks to the MINI Cooper Clubman, but is it worth the extra cost? 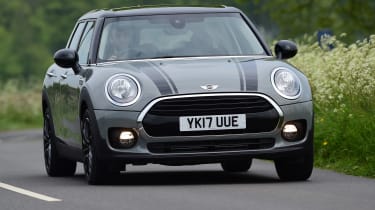 If you like the way the MINI Clubman looks with this new Black Pack fitted, the extra £700 you’ll pay over a standard Cooper is a reasonable price to pay – especially given MINI’s extensive and often pricey optional kit lists. The car itself remains fun to drive and fairly comfy, while offering a more practical option for those dead-set on MINI ownership.

MINI has launched a new version of the Clubman here in the UK called the Black Pack, adding some extra kit and, as you might expect, some black cosmetic add-ons as well.

The new Black Net 17-inch alloys are the most noticeable style tweak, along with some bold black bonnet stripes. On the inside there’s some more piano black trim to match, and you also get some badges on the rear doors to show the world that you’ve bought a Black Pack Clubman.

All MINI Clubmans get sat-nav as standard, plus DAB and Bluetooth, however, while all Coopers also feature cruise control and door mirror puddle lights. So while it’s only £700 more, the Black Pack is really for those who like the looks, rather than being a bargain special edition. 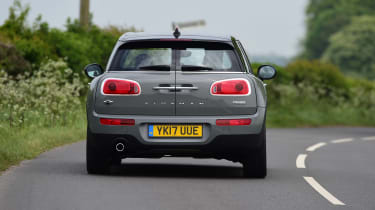 The Black is available on the Cooper trim, as well as in the more frugal Cooper D guise. The Cooper will return 55.4mpg compared to the diesel’s 68.9mpg, though the three-cylinder petrol is characterful and adds am extra sense of fun to the family car.

The 0-62mph sprint takes 9.1 seconds, but the MINI’s agile feel means it feels livelier on the road than it sounds on paper. Like all MINIs, the small windscreen and comfortable driving position give it a sporty feel from behind the wheel as well. 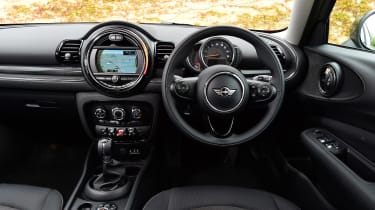 It’s not the sharpest MINI through the bends, with some body roll, but that’s offset by a smoother ride. It’s not as comfortable as a Volkswagen Golf, but the MINI will be comfy enough on UK roads for most buyers.

The 360-litre boot is a bit smaller than the Golf’s 380 litres, and the MINI’s oddly-shaped load space won’t be as useable day-to-day. The rear doors open outwards too, which could be a pain in certain parking spots - and it blocks access from the sides.