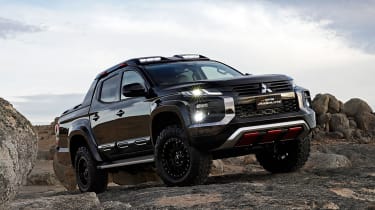 Mitsubishi has built a bespoke edition of its Triton (L200 in Europe) pick-up truck for the 2019 Bangkok Motor Show, called the Triton Absolute. It boasts modifications focussed on off-road functionality rather than looks alone, with the Japanese firm promising strong mechanical durability and improved performance.

To make it more capable off-road, Mitsubishi has also fitted the Triton Absolute with a raised suspension setup and a collection of protective body panelling. No information has been confirmed about Absolute’s engine, but it’ll probably feature the same 179bhp 2.4-litre turbocharged diesel four-cylinder as the standard model.

Depending on the pick-up’s reception at this year’s Bangkok Auto Show, it’s possible that Mitsubishi could build a production variant, giving the Japanese firm a viable rival for the Ford Ranger Raptor. For the time being, however, the project remains a concept car.

What are your thoughts on the Mitsubishi Triton Absolute? Let us know in the comments section below…