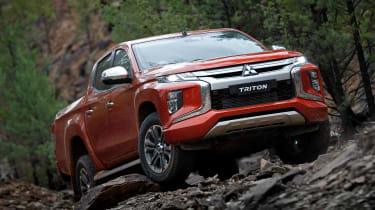 This nip ‘n tuck has done the much favoured Mitsubishi L200 truck the world of good for what’s expected to be only a modest increase in price. The L200 looks sharper, feels more sophisticated to drive and is now packed with the latest safety systems – it’s just a shame UK buyers have to wait until next September to get one.

This is the facelifted Mitsubishi L200 – a somewhat earlier than expected overhaul of the truck that’s won our Pick-up of the Year crown for the last four years in succession.

Launched in Bangkok, Thailand where it’s built, the L200 (or Triton as it’s known in some of the 150 markets where it’s sold) is Mitsubishi’s second biggest seller; 4.7million of these popular trucks have now been sold globally since 1978.

By way of a 40th birthday present, the award-winning mud-plugger has received no less than 2,400 changes in a notably generous overhaul tackling it’s looks, off-road capability and ride - and it’s all the better for it. 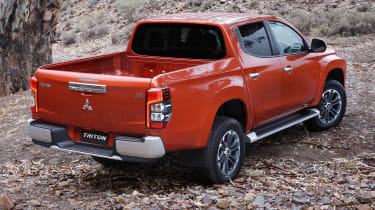 The outgoing L200 has been on the market for four years and – although an undisputed triumph – it has been criticized by some for its softer, more feminine looks when compared to more rugged rivals.

To address this, a radical new face on this new L200 incorporates Mitsubishi’s ‘dynamic shield’ grille design – a theme that’s gradually appeared on all its SUVs from the ASX to the Shogun Sport.

The L200 now rocks a much more masculine aesthetic complete with chiseled cheekbones, chrome flashings and slim-line LED projector headlamps. The headlamps have been raised significantly increasing their distance off the ground to a very wade-worthy 700mm. 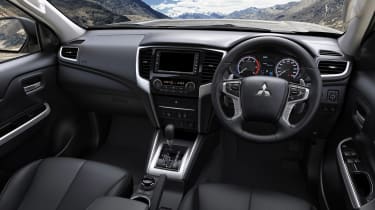 That, coupled with pronounced, squared-off wheel arches and larger 18-inch alloys adds up to a welcome return of the sort of bullish charm pick-up truck buyers seem to appreciate. Around the back it’s more a case of business as usual – bar the tidying up of the previous wraparound tail lamps to more conformist ones.

And while many of the updates have been to cater for lifestyle buyers, those intending to work the L200 hard will be relieved to know that even though its payload or towing capacity hasn’t improved, it’s fully compatible with the existing flatbed accessories of the outgoing model.

Mitsubishi bosses and engineers emphasise that the L200’s rugged durability will remain undiminished despite a raft of the latest safety and off-road tech having been piled on to the once utilitarian workhorse.

And then there’s its new adventurous side, which we tested near Mitsubishi’s Thailand factory that produces 38 L200s every hour. On a test route that took us through bamboo forest tunnels, rivers and challenging off-road sections, the truck performed well.

The rotary Super-Select 4WD system lets you switch between rear-wheel drive and four-wheel drive on the fly and can tailor engine power, transmission and brakes for a variety of specifically testing conditions including gravel, mud/snow, sand and rock. Hill Decent Control and a rear-diff lock also feature in the go-anywhere-do-anything truck’s arsenal of newfound abilities.

The L200’s interior strikes a degree of balance between the bi-polar needs of the lifestyle owner versus the business user and remains close in look and feel to its predecessor. But with scant spots of soft-touch materials for door trim inserts, floor console and central armrest, it’s not going to be challenging the Mercedes X-Class at the plush end of the pick-up class. 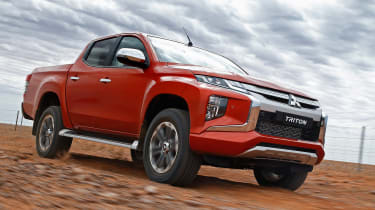 We tested the carried-over 2.4-litre turbodiesel engine that continues to impress with its low-end torquey punch. Mitsubishi won’t commit at this stage to exactly what engine it will drop into the UK spec trucks when then arrive on British shores in late summer 2019 – but it is expected to be this one, just with potentially further improved emissions.

As far as transmissions go, a six-speed manual and six-speed automatic (with sport mode and optimized sixth gear for bonus refinement at speed) transmissions will be the available options.

The steering carries adequate weight and quickness making it no problem to negotiate smaller streets with confidence and stopping power has been beefed up too with larger ventilated front discs and twin-pot calipers.

The ride is relatively composed, for a pick-up, edging ever closer to SUV territory thanks to the increased capacity of the rear shocks for countering the bounce that can plague an unladen truck.