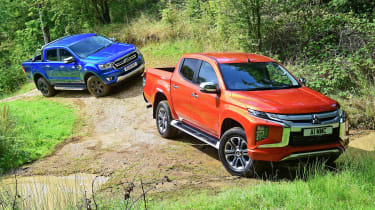 The Mitsubishi L200 won the Auto Express Pick-up of the Year Award for four years in a row from 2015 to 2018. The previous-generation model offered everything truck buyers wanted at an affordable price, so this new L200 has plenty to live up to.

Mitsubishi has overhauled its top-selling truck with a bold new look, just in time to take on another fresh model, Ford’s Ranger.

The Ranger was launched earlier this year and Ford’s revisions worked wonders. Its new pick-up proved to be even better value than the old L200 and it took over the top spot, winning our 2019 pick-up award in July. But here we’ll find out if Mitsubishi has done enough for its truck to take the top spot again. 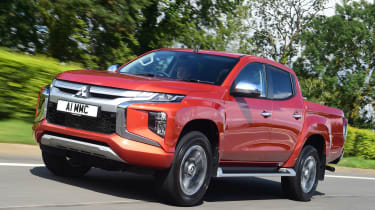 For: Comfortable at speed, good payload capacity, plenty of standard equipment.Against: Shudders over low-speed bumps, engine is less powerful and noisier than the Ranger’s.

Mitsubishi’s L200 has been around for 40 years, and this latest version builds on its award-winning predecessor rather than starting completely afresh. So it still uses a body-on-frame construction (a very common trait in the pick-up world), with leaf-spring rear suspension.

This set-up is good for carrying heavy loads and off-roading, but it tends to lead to an unsettled ride on tarmac. Although the L200 is smooth enough on the motorway and on A-roads when unladen, it still shudders and crashes over big potholes, despite revisions to the suspension by the Japanese brand.

The steering is slow, so you have to apply lots of lock to get round tight bends, but this set-up is very good for off-roading and towing because it gives plenty of stability. You have to put in a bit more effort than in the Ford, but the difference isn’t too great. The L200 isn’t quite as composed as the Ford either, because the Ranger feels more like an SUV. 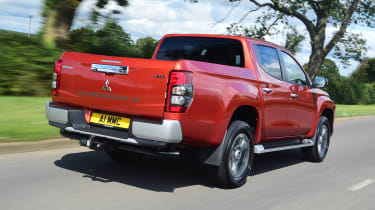 The Mitsubishi’s six-speed automatic gearbox is smooth and shifts down reasonably quickly when you step on the throttle, but the new 10-speed box in the Ford is even smoother and responds more quickly, too. To get the best performance from the L200’s 2.2-litre engine, it’s best to short-shift and use the 400Nm of torque, but the auto gearbox tends to hold onto gears longer. You can use the metal shift paddles behind the steering wheel, but the box isn’t very responsive to inputs from these.

The Mitsubishi managed 0-60mph in 11.2 seconds, which was only 0.2 seconds behind its more powerful rival, and it matched the Ford’s 11.3-second time from 30-70mph through the gears. We weren’t able to record a 50-70mph time in top gear, because even in manual mode the L200 kicked down (in fifth it took 9.2 seconds, the same as the Ranger took in eighth). The greater number of ratios means the Ford is more versatile.

The L200’s engine is acceptable, but no more. That’s because, despite its lower output than before to meet new rules, efficiency hasn’t changed much. The old L200 returned 31.5mpg on test, while this new model did 31.4mpg and we saw 33.5mpg from the Ranger. The L200’s motor is as noisy as before, too, so it doesn’t feel like much of an improvement. 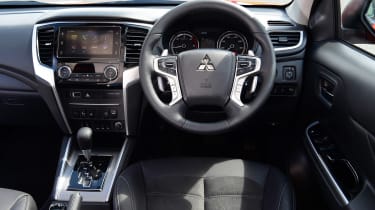 Our high-spec Barbarian X model has a relatively plush interior, with comfortable leather and Alcantara seats, plus a touchscreen infotainment system with Android Auto and Apple CarPlay.

Among the other standard kit is a 360-degree parking camera, blind-spot assist, LED lights and a hydraulically assisted tailgate, but this L200 is expensive next to the Ranger in Limited trim.

For: New engine and gearbox are excellent, plenty of tech, good to drive, rides nicely.Against: Not as well equipped as the L200, heavier weight reduces payload and towing capacity.

In this test we’ve got a Double Cab Limited with Ford’s new 168bhp 2.0-litre diesel engine and 10-speed automatic gearbox. This is the highest trim level available with this powertrain, just as the Barbarian X is in the L200 range.

The Ranger’s engine and gearbox are excellent and a big part of why it’s an Auto Express Award winner. The motor is much quieter and less harsh-sounding than the L200’s 2.2-litre diesel, yet it’s more powerful and more efficient, too. There’s a low rumble as you accelerate, but none of the clatter that you get in the Mitsubishi, and that also helps with in-cabin refinement because there are fewer squeaks and rattles from the interior trim.

The 10-speed gearbox shifts smoothly, and it’s faster to react to changes than the six-speed box in the L200. It’s still lazy by SUV standards though.

In our tests the Ford was 0.2 seconds quicker than its rival from 0-60mph. However, the most impressive part was the Ford’s versatility at higher speed. In fifth, sixth and seventh gears it went from 50-70mph in 7.0, 6.8 and 7.7 seconds respectively (quicker in sixth, due to the torque curve), yet the Mitsubishi took 9.2 seconds in fifth gear.

So despite the Ranger’s heavier kerbweight, its more powerful engine and better gearbox mean that the acceleration is actually more relaxing.

Wind and road noise is suppressed impressively well in the Ranger too, so it’s a match for the L200 on the motorway, because it rides just as smoothly. Both models are settled and composed at higher speeds, but their basic suspension and chassis layout means that they don’t deal with low-speed bumps as well as an SUV or a car.

However, although the Ranger doesn’t iron out bumps completely, it’s much more composed than the L200 in almost all situations. It doesn’t shudder and crash as much on a lumpy section of road.

Both trucks have weighty, slow steering, but the Ford’s set-up is slightly easier because you need less effort around tight bends. The Ranger also has more grip, so you don’t have to brake as much before corners. That makes it more fun and more relaxing on the road; off-road there’s little to split them.

The Ranger’s interior is made of tough plastics like the L200’s, so the main difference is the amount of kit. Ford’s SYNC 3 touchscreen set-up is far easier to use and more responsive, so it feels more up-to-date in the Ranger. Quality is no more than okay, and some areas of the Barbarian X L200 are nicer, like the seats. The Ranger is nearly as well equipped, with heated leather seats, keyless go, smartphone connectivity and a reversing camera as standard.

The Ranger’s engine is strong but doesn’t compromise efficiency, and the new 10-speed auto is a great companion. They are quiet and smooth together, and push the Ranger ahead of its rival. The Ford is great off road, spacious and more affordable, and gets enough kit, so it’s our winner. 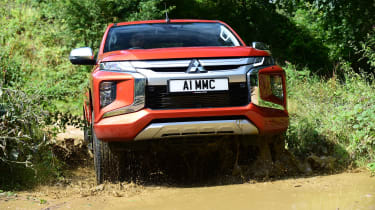 The new L200 is still a good pick-up truck, better equipped and more comfortable than before, but it’s not all good news. Its 2.2-litre engine is less flexible and no more efficient than the previous version, so it falls behind the much-improved, more refined and more efficient Ranger.