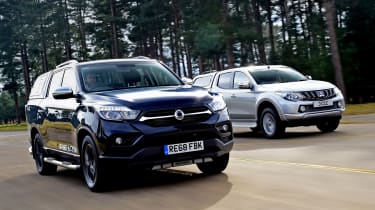 SsangYong might not be a household name just yet, but the brand’s current range of cars is by far its best yet.

With its new Musso pick-up truck, the Korean firm is hoping to attract buyers needing a versatile working vehicle. Many people are choosing the new crop of pick-ups that offers masses of practicality for the working week and SUV-like kerb appeal – not to mention tax benefits.

With its pumped-up looks and an interior that has a similar design to SsangYong’s Rexton SUV, can the Musso beat our current favourite truck, the Mitsubishi L200, at its own game?

The L200 has been crowned Best Pick-up at our annual New Car Awards four years running, but will it see off the Musso? 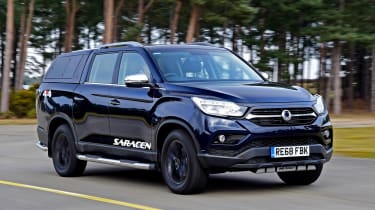 For: Quiet inside for a pick-up, strong towing capacity and payload, good infotainment set-up.Against: Uncomfortable ride, performance could be better, slow and disconnected steering.

Ssangyong only offers the Musso as a double-cab pick-up, but you can choose from manual and automatic boxes to go with the 2.2-litre diesel.

While the six-speed auto shifts smoothly enough, it’s not as decisive as the L200’s box. So even though the SsangYong’s set-up has an extra cog, the gearing is still longer in each ratio than the Mitsubishi’s five-speeder. That contributed to decent fuel economy in the Musso of 34.3mpg (the L200 managed 31.5mpg), but hampered performance.

At the test track, the SsangYong took 20.6 seconds to cover 50-70mph in top gear, but even in fifth, it could only manage 14.5 seconds. The L200 completed the same test in fifth in 7.0 seconds, so it’s more at home on the motorway than the Korean truck in terms of performance. Still, once at a cruise, the Musso comes into its own, because it’s one of the quietest trucks around. Wind and road noise is suppressed impressively well and the diesel engine is much quieter than the Mitsubishi’s noisy unit. 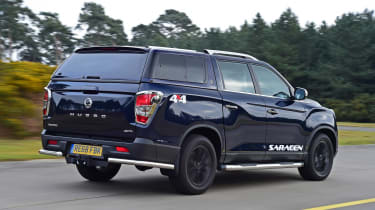 The Musso’s interior reminds us of the Rexton SUV it shares parts with, and features such as the modern infotainment system and heated leather steering wheel contribute towards its ease of use.

However, despite recent suspension revisions, the Musso’s ride lets things down. Unlike in the L200, which has leaf springs at the rear, there are coil springs fitted to the SsangYong. In order to support a 1,085kg payload, these are stiff, which means the rear end bounces and shudders over even the smallest bumps in the road.

Sadly, the front end isn’t much better, so on all but the smoothest roads the Musso is constantly shuddering as you drive – even when loaded up. Large potholes cause a harsh crash in the cabin as well, and this constant movement means that, even with its impressive interior, the Korean model’s refinement is frustratingly shattered. 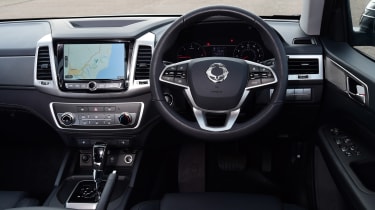 The SsangYong’s steering is light, so it’s relatively easy to drive around town, yet when you make larger steering inputs, it’s vague and slow, not changing direction even as well as the L200. Combined with the unsettled ride, that means twisty roads aren’t its natural habitat, whereas the L200 would plough on there without issue. At least the slow steering helps the Musso’s off-road ability, adding stability on loose and slippery surfaces.

Still, the Musso is very well equipped; Saracen trim brings heated leather seats front and back, with a cooling function for the front chairs. Then there is cruise control, air-con, 18-inch alloys and a large 9.2-inch infotainment system with sat-nav, a reversing camera and smartphone connectivity. 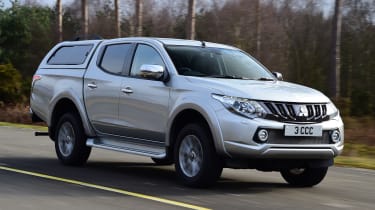 The Mitsubishi L200 has been named Best Pick-up at every Auto Express New Car Awards since 2015 – so even with a new model on the way, this is still the truck to beat.

One of the L200’s most impressive aspects is its composed ride. It’s not the last word in comfort – the much more expensive Mercedes X-Class is – but what the Mitsubishi manages is composure in spite of its agricultural chassis set-up.

It uses a body-on-frame construction, like most pick-ups, along with leaf-spring rear suspension. This means it is good at all the things a truck should be, such as carrying a heavy load or off-roading, but the L200 doesn’t bounce and shake on normal roads like the Musso does. 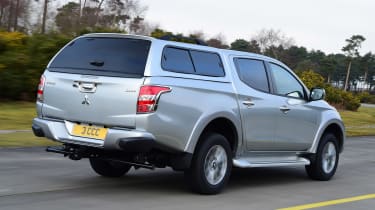 With nothing in the load bay, the Mitsubishi is smooth enough on a motorway and on bigger A-roads, and while the Japanese pick-up still shuffles and crashes over big potholes, it’s better at dealing with them than its competitor here.

The L200 also benefits hugely from its steering, which – in contrast to the SsangYong’s numb set-up – feels a little more connected to what the front wheels are doing. That in turn gives you more confidence when on the road.

The 2.4-litre diesel engine is reasonably smooth, but it is noisy next to its rival here, and the five-speed automatic box means it sits higher in the rev range at the same cruising speed.

But the transmission is faster to react than the six-speed unit in the Musso, and the L200’s lighter kerbweight, torquier engine and shorter ratios mean it has the edge here for performance.

The Japanese truck managed 0-60mph in 10.1 seconds, half a second faster than its rival, and 9.7 seconds through the gears from 30-70mph. That was well ahead of the Musso’s 11.7-second time, and demonstrates the advantage the L200 will have with a payload in its load bed. Our in-gear tests showed that the Mitsubishi was quicker from 30-50mph and 50-70mph in every ratio, too. 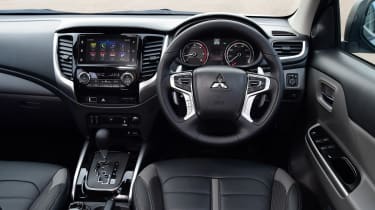 The cabin on higher-specification L200s is decent, with leather seats and a seven-inch touchscreen infotainment system included. Its build quality is slightly better than the SsangYong’s and there were fewer creaks and rattles inside, in part thanks to the softer ride.

Standard equipment on Warrior trim doesn’t include sat-nav, but the infotainment system does come with smartphone connectivity, so you can get navigation through your device. Heated seats, a reversing camera, 17-inch alloy wheels, keyless go and climate control are also included. 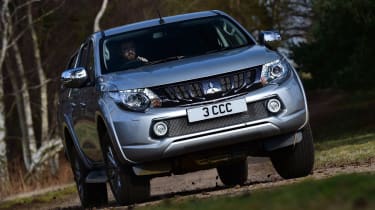 The Mitsubishi L200 retains its crown as the best pick-up on the market. It’s more comfortable and the powertrain offers good flexibility, even if it is a bit noisy. But the L200 is also well equipped, efficient enough and is spacious, while accessories, such as the towbar, are cheaper. 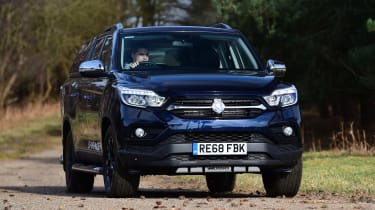 The Musso’s SUV-like interior, quiet engine and cruising refinement impress initially. But after a few miles the numb steering and uncomfortable ride undo the good work. It’s no more practical than the L200, yet feels more flawed in areas – although the infotainment is good and it costs less to run.