The SsangYong Musso pick-up is strong in many areas beyond just value, but is let down by a poor ride 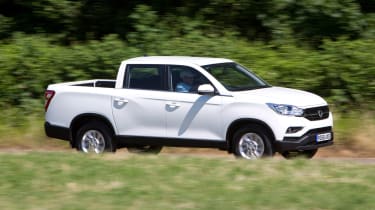 The SsangYong Musso used to be for sale as an SUV, but it’s now the company’s pick-up truck, and the latest version has been on sale since 2018. It’s based on the hardware as the Rexton SUV, and the Musso features body-on-chassis construction, which is commonplace in the sector as it gives good off-road ability and high load-carrying capacity.

The Musso is targeted directly at key rivals such as the top-selling Ford Ranger, Mitsubishi L200, Toyota Hilux and Nissan Navara, all of which aim to offer high levels of utility with the comfort and features of a regular passenger car.

The Musso is available with a single engine option, a 2.2-litre four-cylinder turbocharged diesel unit that is also shared with the Rexton, and it delivers 178bhp and 400Nm of torque. It can be specified with a six-speed manual or six-speed automatic transmission, and all versions are fitted with a part-time four-wheel-drive system that sends drive to the front wheels only when it is needed. High and low range 4WD modes are also selectable by the driver.

The Musso is available in four trims, with the entry-level EX aimed primarily at the commercial user with standard cloth seats a fewer interior comforts. The Rebel, Saracen and top-specification Rhino models are better suited to private buyers, with larger alloy wheels and better cabin materials, such as leather seats and higher-grade infotainment systems. 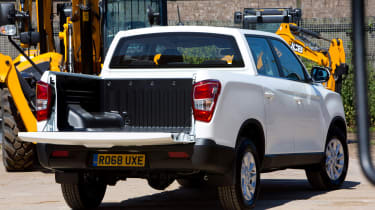 For what is usually considered a high-value brand, the SsangYong Musso is impressively capable in many areas. It even outclasses its key rivals in areas such as the quality of the cabin and the infotainment system, towing ability and overall refinement. What lets it down however is the unladen ride, which is harsh and bouncy. SsangYong is considering making changes to rear suspension to cure the issue - if it does so, the Musso has the all-round ability to challenge for best-in-class honours. That is a big statement to make when you consider some of the strong contenders in the pick-up truck class.

Anyone looking to purchase a pick-up truck will expect relatively high fuel bills even when powered by a diesel engine, and the Musso is typical of the breed. An official combined figure of 32.8mpg puts it behind key rivals from Mitsubishi and Nissan, and translates to consumption in the mid-20s during everyday use.

Similarly, an official CO2 figure of 226g/km is high by general standards, and also lags behind the Mitsubishi L200 and Nissan Navara. Both consumption and emissions performance are improved slightly when fitted with the manual gearbox, but even then the Musso still performs relatively poorly in comparison. Still, pick-up trucks qualify for light commercial vehicle road tax, so all trucks in the class cost £250 in annual tax.

The Musso is fitted with a large 75-litre fuel tank which helps to mitigate the low economy, and gives the potential for a range of just under 500 miles from a full tank. As with most pick-up trucks, aerodynamics play a key part in reducing fuel economy, and the Musso has a large frontal area, tall body and tyres designed for grip rather than low rolling resistance, all of which reduce fuel efficiency. A further contributor to the Musso’s economy performance is that it’s not fitted with an engine stop/start system, either as standard or as an option. This is in contrast to its key rivals and puts it at a further disadvantage for everyday running costs. 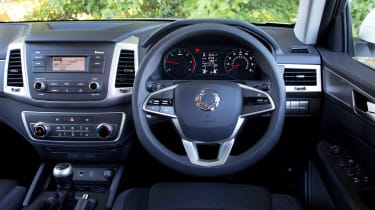 Insurance groups for the Musso range from 40 for the entry-level EX model up to 42 for the top-specification Rhino model, putting it considerably higher than all of its main rivals and potentially adding significantly to its running costs.

Previous SsangYong models have performed relatively poorly in terms of depreciation, but its more recent offerings are showing improvements. While the brand itself does not have a strong reputation in terms of retained value, the low selling price, high specification and the best warranty in the sector - seven year/150,000 miles - go some way to redressing this.

The Musso is available in just one double-cab bodystyle, frequently the most popular choice amongst pick-up buyers, as it offers the most room for rear-seat passengers. Five seats are available for passengers, with four full-size and a slightly narrower centre seat on the rear bench.

From the driver’s seat, the Musso offers a typically panoramic view of the road ahead thanks to the high ride height and driving position, while the electric seat controls and steering column rake and reach adjustment make it easy for drivers of all sizes to get comfortable. Even rear vision is relatively good considering the limited size of the rear window, but this is bolstered by the addition of a reversing camera on Rebel models and above.

Among the key rivals in the pick-up sector, the Musso is one of the shortest; the Mitsubishi L200 is 190mm longer and the Nissan Navara is longer still, which is reflected in the length of the load bay. However, the Musso is wider than both of these competitors which helps both the flat-bed area and passenger accommodation. The Musso also has an advantage in terms of ground clearance over the L200, which is particularly useful for owners who regularly go off-road. 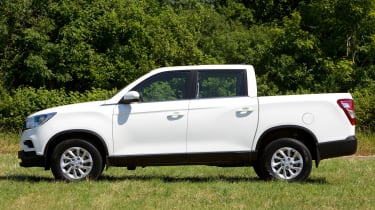 Space is a crucial factor for working vehicles like pick-ups, and the Musso delivers on all counts. For the driver and passenger, head and legroom are more than adequate with a double-cab configuration that gives rear seat passengers easier entry and crucial extra space. Five adults can be accommodated, while four adults will have space to spare. There are also a number of useful storage areas within the cabin, in particular a generous cubby underneath the central armrest.

The flat-bed also shows good practical thinking has been applied to the design of the Musso, as it features rotating hooks to secure cargo and a 12v power outlet to allow auxiliary equipment to be plugged in. Its size allows a standard Euro pallet to be carried, with a 1,085kg payload maximum on automatic models. A stretched version that offers an additional 400mm of cargo space is expected in 2019.

For anyone that plans to use a pick-up for towing, the Musso deserves serious consideration thanks to its impressive performance. It is one of the few pick-up trucks that can tow 3,500kg and carry over 1,000kg payload at the same time, and is backed up by the security of selectable four-wheel-drive. In addition, higher-specification models with the reversing camera benefit from an excellent rear view that is ideal during hitching and low-speed manoeuvres.

Historically pick-ups have performed less well compared to conventional cars due to their separate chassis design, but this has improved in recent years with addition of modern safety systems. All versions of the Musso are fitted with six airbags, ESP and Active Rollover Protection, although at present features such as autonomous emergency braking are not available. Euro NCAP has yet to test the Musso, so an official safety rating is unavailable, but the lack of some safety features compared to rivals mean that a five-star result will be difficult to achieve.

As SsangYong is a relatively small player in the UK market it has not featured in the Driver Power survey, so in reliability terms it is relatively unknown. However, the Musso uses a proven Mercedes  power unit and the perceived quality of the interior is above the usual standard of a pick-up, which suggests it will at least match the class standard. 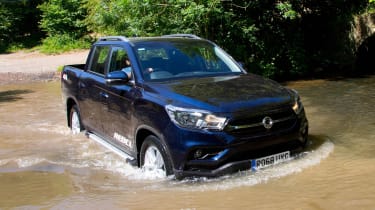 There is reassurance in the fact that the Musso comes with one of the longest warranties on the market, and includes elements that are frequently excluded by others. The standard warranty is a seven-year/150,000 mile policy, with battery and paintwork cover for three years and some consumables such as brakes and clutch covered for the first year or 12,500 miles. The warranty also provides cover for wheel bearings, suspension joints, steering components and the infotainment system, elements which are commonly excluded.

All SsangYong models follow a relatively strict 12 months/12,500 mile service interval compared to the variable service intervals available on some competitor vehicles. SsangYong currently quotes a price of around £130 for a minor service which is competitive for a vehicle of this size.

The 2.2-litre diesel engine in the Musso works well with the six-speed automatic gearbox, performing better than some key rivals. It has generous torque available from as low as 1,600rpm which makes short work of acceleration, and while the Musso isn’t fast, it has more than sufficient performance for a vehicle of this type. The Musso also impresses in terms of refinement, with little in the way of vibrations and relatively low noise levels from the diesel engine.

Less impressive is the steering of the Musso, which has a very light action and doesn’t provide much in the way of feedback through the wheel, making it somewhat difficult to place on the road and steer accurately through corners. Another area where the Musso does not perform as well as the competition is in respect of ride quality. Pick-ups generally do not ride as well as conventional cars on account of their separate chassis, but the rear suspension of the Musso causes excessive bouncing and movement over bumps, even when compared to rivals, making for uncomfortable progress. With the rear bed loaded up, the ride improves considerably, while SsangYong is considering making changes to the suspension to improve the ride. 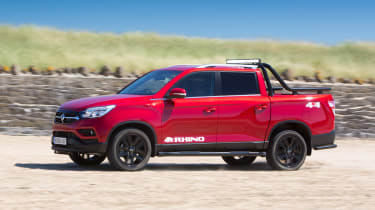 The Musso is available with a single engine option; a 2.2-litre four-cylinder turbodiesel developed and built by SsangYong. When paired with the six-speed automatic transmission, it provides useful acceleration and displays an ability to cope with towing heaving loads, all delivered with an impressive lack of fuss coming from the engine bay. The Musso’s top speed is 115mph with the automatic transmission, which is competitive, and while an official 0-62mph time isn’t quoted, an estimated time of 12 seconds is good for a vehicle of this size.

The Musso and its stablemates have benefitted greatly from a more modern approach to exterior design, and where once SsangYong models frequently looked ungainly or ill-proportioned, they now can compete on level terms with more established manufacturers.

Within the constraints of a typical pick-up silhouette, the Musso has a distinctive nose without looking too aggressive, while the cleans lines and tidy tailgate help to provide a premium look. All versions come with alloy wheels as standard, but the 18-inch wheels of the Rebel and Saracen models and 20-inch versions on the top-specification Rhino boost the quality feel.

Arguably even more impressive is the Musso’s interior, which borrows heavily from the Rexton. The dashboard design is largely copied across and provides the Musso with a cabin that is a cut above the class standard, thanks to soft-touch plastics and an attractive design. The instruments are clear and smartly styled, the centre console is simple but finished with attractive buttons and switches, and the quality of the leather trim where fitted is of a good standard.

Saracen and Rhino models are fitted with Nappa leather seats that are heated and cooled, electrically operated and backed-up by a heated leather steering wheel - features that are more common on premium SUVs than pick-ups.

All versions of the Musso feature a DAB radio with Bluetooth phone connectivity and audio streaming, but move up to the Rebel trim and an 8-inch touch screen is fitted including a rear-view camera, Apple CarPlay and Android Auto. Above that, the Saracen and Rhino models add a larger 9.2-inch screen with TomTom navigation included, which is easy to use and offers a high-resolution display for excellent clarity. 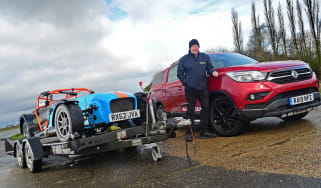 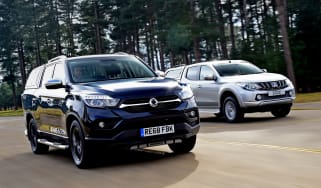 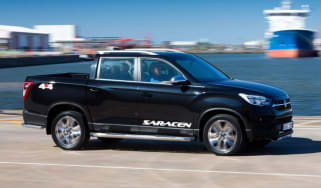 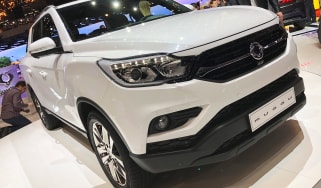 The new version of the SsangYong Musso pick-up will arrive in June and is heavily influenced by the brand’s Rexton SUV. Watch the video...
Skip to HeaderSkip to Content