It's priced competitively, but can the SsangYong Musso pick-up really compete with the Ford Ranger? 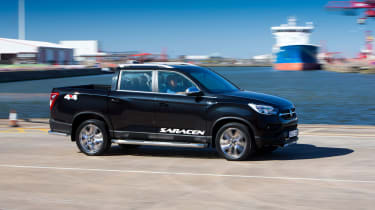 It may come as a surprise to some, but the Musso is a class-leading pick-up in more ways than one. While a competitive price and a strong warranty aren’t unexpected, the fact that it has the plushest cabin, impressive refinement, a great infotainment system and the best load-lugging capacity are more eye-opening. However, the ride lets the side down, and does so badly. If Ssangyong improves the ride quality as it intends to do while, crucially, maintaining its load-lugging capability, this could quite reasonably become a four-star car.

The Ssangyong Musso: a name which, for some people, will bring back memories of a large, odd-looking SUV from the early nineties. Today, however, the Musso is a pick-up with a focus less on looks and more on the sensible stuff.

Since 2016, the Musso name has been applied exclusively to a pick-up - in the UK at least - and this all-new model is a workhorse which Ssangyong believes can steal a chunk of the lucrative 50,000 units a-year market from the Ford Ranger and the Mitsubishi L200. 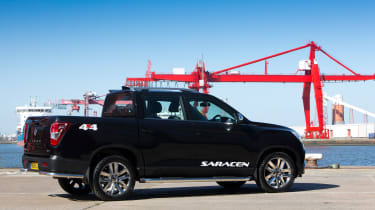 The Musso uses the same body-on-chassis structure as the SsangYong Rexton SUV, which from a styling point of view, means that the weirdness (or downright ugliness) of Ssangyongs of old has been replaced with a smart, inoffensive look.

Ssangyong believes that it’s the most SUV-like choice among its rivals, and from the driver’s seat, it might have a point. It shares its dashboard design with the Rexton, which in pick-up terms makes it a cut above almost any of its rivals. There’s soft, squidgy plastics on the dash, a fully adjustable steering wheel, a damped glovebox, and switchgear that’s pleasing to use. The Nissan Navara runs it close for rear accomodation, but the Ssangyong has the best back seats of any of its rivals, too.

Then there’s the infotainment system, which is good by any standards, let alone relative to its rivals. The 9.2-inch screen offered in some models is big, bright and simple to use, and benefits from Apple CarPlay and Android Auto compatibility. It also gets an impressively hi-res reversing camera which, thanks to its location, allows you to see the tow bar as you line up a trailer to hitch.

And towing is something that the Musso is exceptional at. It’s the only car in the segment which can tow a 3.5-tonne trailer while hauling a further tonne in the rear load bed at the same time. The Mercedes-sourced 2.2-litre diesel engine is shared with the Rexton but the Musso has a six-speed auto instead of the Rexton’s seven-speed item (though the manual is the same). It's more than torquey enough to cope and is refined too: smoother than the equivalent diesel in the Ford Ranger, for example, though the lack of a fuel-saving stop/start system is odd.

Trailer or not, this isn’t a car to be hurried. It feels big and ponderous through the corners, and the steering is very light and has almost no feel. A Ranger isn’t a match for most SUVs in the handling stakes, but it feels better resolved than the Musso.

While driving thrills shouldn’t really be a concern in vehicles like this, comfort should be. And that’s a problem, because the rear springs bounce violently from bump to bump, while the comparatively soft damping struggles to keep the Musso's mass in check. Things do improve, however, when the Musso’s cab is loaded up: with around a tonne of bricks in the back, it smoothes itself out significantly. Either way, it’s worth noting that, off the back of road testers’ feedback - including our own - Ssangyong is considering replacing the rear springs to make things a little more bearable. 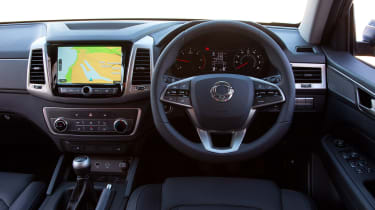 Easier to stomach than the ride quality is the price. Like-for-like, the entry level Musso is around 10% cheaper than a Mitsubishi L200 - and more so when you take standard equipment levels into account.

There’s four trim levels to choose from. While the base level EX is the most work-based model, it comes with plenty of standard kit, including alloy wheels, a DAB radio, bluetooth and air conditioning.

Above that, the Rebel gets an eight-inch touchscreen, heated and cooled leather-effect seats, and special exterior graphics. Top spec Saracen and Rhino models add full leather, a heated steering wheel, and that 9.2-inch screen, while the latter gets all-terrain tyres, and 20-inch alloy wheels finished in black. Also standard is a class-leading seven-year, 150,000-mile warranty.