The SsangYong Rexton 4x4 is pitched as a bargain-priced Discovery – so does it deliver? 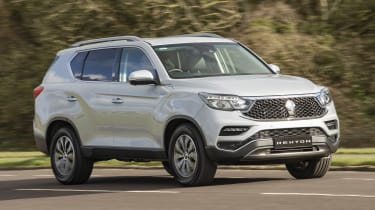 When the first SsangYong Rexton appeared on UK shores in 2003, it was notable for being very large and very cheap, but not a lot else. In the intervening years the company didn’t do much to improve things, while a glut of more modern and sophisticated SUVs appeared to highlight the Rexton’s predicament as a motoring dinosaur.

The Korean car maker’s regeneration has been in full swing for a while now, however, with models such as the Tivoli showing SsangYong has what it takes to go toe to toe with brands in Europe. Now it’s the turn of the facelifted Rexton, which went on sale in early 2020 with a choice of five or seven seats.

While styling is always subjective, to our eyes the previous Rexton had already achieved a cleaner, more upmarket look, which is perhaps why exterior changes for the refreshed model are limited to a new grille. The sharper appearance can’t disguise its sheer size, though – that bulky rear overhang is a consequence of it being 8cm longer and 12cm taller than a Hyundai Santa Fe.

SsangYong has made a few mechanical tweaks to the Rexton, but the one thing that hasn’t changed is its separate chassis construction; although this format is undeniably rugged, these days it’s typically reserved for commercial-based pick-ups and the like. 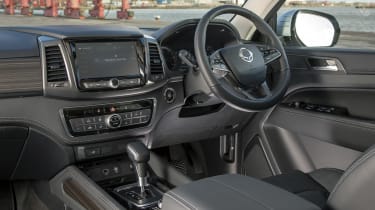 The Rexton includes three core trim levels - EX, ELX and Ultimate, although there is also the ICE edition which comes with unique Ice White pearl paint. Base cars are fairly well appointed, but the Ultimate model is packed to the rafters with a 9.2-inch touchscreen sat-nav, Apple CarPlay and Android Auto, quilted leather, heated and cooled memory seats, and even an around-view camera.

There’s also a full suite of active and autonomous safety tech, but as a result, the Rexton is no longer the bargain buy it once was. The Ultimate version is priced at almost £40,000, which puts it head-to-head with a top-spec Skoda Kodiaq.

All this kit doesn’t make the interior feel any posher, though; the design and quality are probably akin to a Mercedes ML-Class of a couple of generations ago. Still, if you want a genuinely tough machine for towing, or an off-road workhorse that can double up as convincing family transport, the Rexton ticks a lot of boxes.

Despite persisting with a body-on-frame construction – a design that you’ll only really see on pick-ups and dedicated off-roaders these days – SsangYong did at least manage to address some issues with the chassis set-up, and the Rexton is considerably stiffer, with far more high-strength steel used than in previous generations.

The downside of body-on-frame cars is that they rarely match the ride and handling standards set by the unibody construction of most modern SUVs - and the Rexton is no different.

SsangYong has introduced recalibrated steering with adjusted weighting to the refreshed model, plus tweaks to the springs and dampers and new wheels and tyres. Improvements to the driving dynamics are noticeable, but this is by no means front line technology.

The steering is overly assisted, which is ideal for off-roading, but its vagueness takes a bit of getting used to on tarmac. Most of the time the ride is soft and well damped, while wind and road noise aren’t noticeable. But hit a sharp bump and shudders are still felt through the body and steering column.

Push hard through bends and the Rexton feels heavy with noticeable body roll, but again, it’s perfectly acceptable when driven with moderation.

As a result, for those after a rugged workhorse with enough comfort for the family, it strikes a decent balance between on-road composure and very effective off-road prowess. A locking centre differential and low-range ratios in the gearbox mean the Rexton will keep ploughing on when many more premium SUV rivals are floundering.

SsangYong only offers a single diesel engine option - the 2.2-litre E-XDI oil-burner delivers 179bhp and a maximum 420Nm of torque, which is enough to give the Rexton acceptable performance and surprising refinement, too.

The engine only becomes raucous higher in the rev band, but that’s fine, because the Mercedes-sourced seven-speed auto gearbox is happier taking it easy; the set-up is slow to kick down and sends revs soaring under hard acceleration. The six-speed manual option may well be favoured by users with off-road ambitions.

Either way, the Rexton doesn’t encourage being pushed, but if you want to go as fast as possible you should opt for the manual version, which covers 0-62mph in 11.3 seconds. The auto version is slightly slower at 11.9 seconds, with all models capable of a 115mph top speed.

Neither fuel efficiency or emissions are the Rexton’s forte, but it’s comparable to pick-up rivals

The Rexton is a big, heavy car, and its running costs – particularly fuel consumption – are much closer to a one-tonne pick-up truck than some of the lighter, but more fashionable SUVs on the market. That’s probably fair enough, given that the Rexton is arguably more likely to appeal to buyers considering a Mitsubishi L200-style double cab or Nissan Navara.

Official fuel economy for five-seat versions with the six-speed manual gearbox stands at 36.2mpg, with SsangYong claiming 32.9mpg for autos.

Emissions are relatively high, too, which is definitely a potential issue for business users. With tailpipe CO2 figures ranging from 205g/km to 227g/km, the Rexton attracts the steepest Benefit-in-Kind percentage. And, combined with increased purchase prices, SsangYong's big SUV loses out to rival one-tonne pick-up trucks with their generous tax breaks. 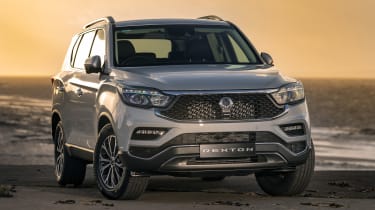 At least road tax is a manageable £150 annually, because no Rexton breaches the £40,000 threshold. However, the Ultimate-spec models do come very close, and if you opt for metallic paint (at £500), you will be paying £475 in VED during years 2-6.

The entry-level Rexton EX sits in insurance group 28, while top-spec Ultimate models are in group 32. By comparison, a 2.0-litre diesel (187bhp) Skoda Kodiaq in Laurin & Klement trim is in group 25. However, a Nissan Navara pick-up in Tekna specification will be more expensive to insure as it occupies group 41.

Once a byword for plummeting prices, SsangYong has proven, with the likes of the Tivoli, that it can produce cars whose desirability extends into the used market. Expert data suggests the Rexton will hold onto around 44% of its value over three years and 36,000 miles.

The SsangYong Rexton has all the toys you could wish for, but still feels slightly dated

The latest Rexton may not have the street cred or style of the new Land Rover Defender, but it still holds huge appeal as a tow car and may well entice those people who like to go off the beaten track and just fancy something a bit different.

It’s big and boxy as before, but the Rexton has a redesigned grille to help it feel just a little more upmarket. This is further complemented by the rakish headlamps with LED running lights, creating a more up-to-date look. 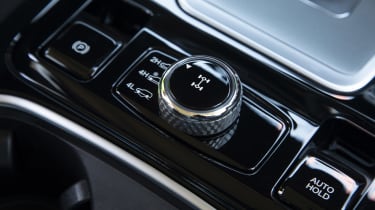 Jump inside and the first thing you’ll notice – apart from the impressive space on offer – is the attempt to address cabin quality. SsangYong has done its best to add soft-touch plastics and piano-black surfaces, but the plasticised chrome feels tacky.

The top-spec Rexton comes with a big 9.2-inch touchscreen featuring all the bells and whistles, while even entry-level EX models offer an eight-inch touchscreen with DAB radio and smartphone connectivity, as well as a reversing camera and MP3 playback. The instrument cluster scores on hi-tech appeal, too, with its various selectable functions and engaging start-up animation. Range-topping Ultimate versions add a  3D around view monitoring system and an 8.0-inch TFT driver information display.

It’s a genuine seven-seater with loads of luggage space, and a great tow car, too

As you would expect from a car the size of the Rexton, there’s plenty of space inside, as well as a light and airy feel. It’s also pretty luxurious, with nappa leather upholstery, loads of adjustment for the front seats – powered of course – and plenty of creature comforts to boot. Visibility is excellent, but the sheer size of the Rexton may cause difficulties for some less-confident drivers.

The Rexton is available with five or seven seats. Up front the driver and passenger have acres of space. There’s loads of headroom for the second row and reasonable legroom, while the optional third row of seats has a more spacious feel than you’ll find in a Skoda Kodiaq or Kia Sorento. The third row is relatively cramped, though, and you have to fold down one of the chairs in the second row to access these rearmost seats. 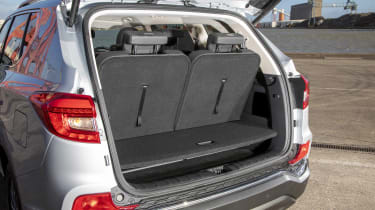 Five-seat models benefit from a huge 820-litre boot, and if you want to fold the seats down it increases to a van-like 1,977 litres. There’s a false floor behind the seats which gives a fully flat load space from the tailgate across the folded second-row seats. With the third row of seats installed but folded down, you still get an impressive 649 litres of luggage space – and they live beneath the false floor when not in use.

With its heavy build and body-on-frame construction retained, the Rexton remains a very strong tow car. In fact it can mix it with the far pricier Land Rover Discovery, which also has a 3.5-tonne braked trailer limit, and the combination of low-ratio gears and four-wheel drive should make tricky off-tarmac towing tasks a breeze.

The Rexton range has won a decent reputation for reliability thanks to its somewhat agricultural engineering and relative simplicity. There’s a lot more hi-tech kit on the latest model, but the nuts and bolts beneath it should be as solid as ever. The latest engine is SsangYong’s own design, but the auto gearbox is a former Mercedes product which has been well tested over the years.

Plenty of seven-seat SsangYongs have also found their way into taxi fleets in the past, which must speak volumes about the vehicles’ capacity to soak up miles.

The Rexton hasn’t been crash-tested by Euro NCAP, but it benefits from an extensive range of safety equipment, including active emergency braking, collision warning and lane departure warning – bolstered on top-spec versions by blind spot and cross traffic alerts. ELX and Ultimate models also add side airbags for rear seat passengers and a driver's knee airbag.

SsangYong provides a 7 year/150,000 mile warranty for all of its vehicles. If you decide to sell your vehicle within the warranty period, the new owner will also benefit from the remaining cover.

Rexton owners will need to book a service every year or 12,500 miles.

For an alternative review of the latest SsangYong Rexton SUV visit our sister site carbuyer.co.uk 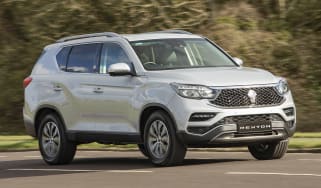 After a four-wheel-drive vehicle with a bit more off-road clout than the average SUV? Our top 10 best 4x4s list is the place to go…
SsangYong Rexton ELX: long-term test review 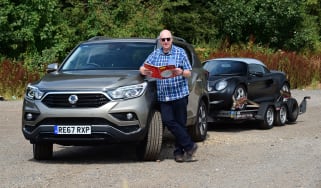 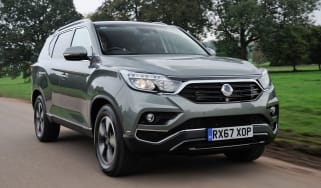 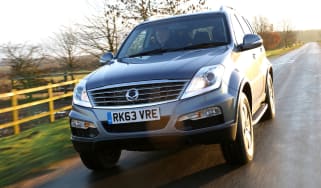 The SsangYong Rexton W offers plenty of space at a reasonable price, but poor ride quality lets it down
Ssangyong Rexton (2003-2010) review 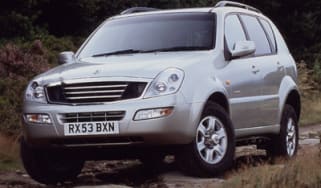 This chunky off-roader is yet another budget-priced vehicle with enviable ability off-road.
SsangYong Rexton 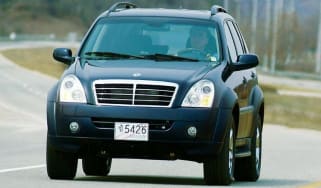 It's practical, rugged and more stylish than it's predecessors. We get a world exclusive report on SsangYong's Rexton II
Skip to HeaderSkip to Content