It's practical, rugged and more stylish than it's predecessors. We get a world exclusive report on SsangYong's Rexton II 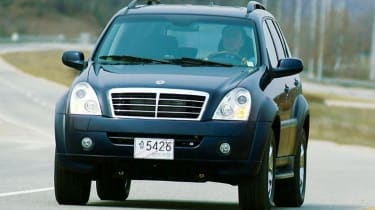 Practical, rugged and far more stylish than any other SsangYong, the revised Rexton is set to be the firm's strongest car. Compared to many rivals it's still agricultural, but it's ideal for towing, and is capable off-road. If you want a traditional 4x4 that stands out from the crowd without breaking the bank, the Rexton could be for you.

In a line-up that ranges from the oddball Kyron to the plain ugly Rodius, SsangYong's older Rexton is comparatively stylish. So, we were worried to hear that designers had set about facelifting the company's best-looking 4x4. Now, Auto Express can reveal what they have created - in a world exclusive first drive report.

The good news is that the Rexton's lines have remained mainly unchanged. Only the nose has gone under the scalpel, with the grille from Ssang-Yong's Chairman saloon grafted on. It looks smart, and is similar to the Mercedes M-Class or Lexus RX.

Inside, the modifications are equally subtle. The chunky dashboard has been left alone, but there's now a mobile phone holder on top of the facia, while the 6.5-inch LCD screen in the console can be linked to a digital camera or camcorder.

There's also an automatic parking brake, tyre pressure sensors and new heated seats - meaning more buttons to play with than ever. This increased specification is completed by a revised automatic transmission, which benefits from a new Tiptronic-style gearlever.

Under the bonnet, the Rexton shares its 2.7-litre engine with the M-Class, and the beefy turbodiesel has 188bhp - up from 165bhp - and 402Nm of torque. Mated to the revised five-speed automatic gearbox - which serves up smoother changes - it offers strong acceleration, and makes the Rexton a decent motorway cruiser.

The car is adequate in corners, too. Given its size and 2,125kg kerbweight, you'd expect the Rexton to be unwieldy, but new air-suspension, complete with electronically controlled air springs for the front double wishbones and multi-link rear layout, means the opposite is true. Capable of dropping the body 30mm, the set-up ensures the Rexton is more nimble than you'd think; it isn't in the same league as a Land Rover Discovery, yet this car is a big improvement over the previous model.

There's no Discovery-style Terrain Response system, but with around 200mm of ground clearance, plus a new Hill Descent Control system, the Rexton is capable in the rough. The air-suspension also has a self-levelling function - handy if all seven seats are in use, or if they're folded flat and you're carrying a load.

Bosses at SsangYong have yet to confirm a UK launch date for the face-lifted car, but buyers should expect to see it in British showrooms within the next 12 months. The changes certainly make it more appealing, and the fresh Rexton deserves to be a success.