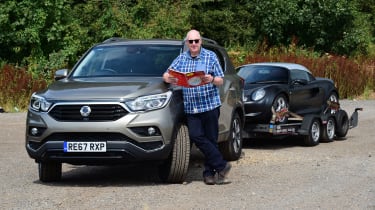 The jury is still out on the Rexton’s styling and we’re certainly not going to miss the unsettled ride, but the SsangYong will be a hard act to follow when it comes to towing over thousands of miles.

The SsangYong Rexton’s time on our fleet is now sadly at an end. It’s been all about long trips, and the mileage crept over 8,000 miles while on a recent week-long track-day tour in France.

The big SUV is at its best on smooth Autoroutes. It just eats up the miles with the engine near silent at the legal limit and little wind noise; it’s a great car to travel long distances in. The trailer is stable and barely noticeable, and I was thankful for the cruise control and icy air-con during the recent heatwave across Europe. More than once we used the Rexton as a space to literally chill out.

Our Rexton ELX is the seven-seat version, but the rearmost set was folded flat within the first week and was rarely lifted again, as we took advantage of the huge 1,806-litre load space. It swallowed a set of wheels, race kit, tools and spares, plus the storage under the parcel shelf took smaller items, such as a European travel kit, a brolly and protective clothing. 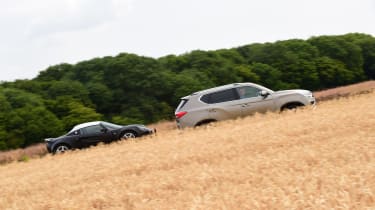 How many wheels and tyres can you get in a Rexton? With the middle seats also folded flat we managed 16, with space for a few more to be stowed.

The cabin is a pleasant place to be, too, with Apple CarPlay and plenty of driver aids, including speed limit sign recognition, automatic emergency braking and lane departure warning. We soon turned off the latter feature because it was frequently triggered when driving on the rural roads where I live.

The materials inside are pretty good as well compared with previous versions of the Rexton, but the heavy use did see some marks appearing. I put a rubber mat in the load area to protect the carpet, which was fluffing up in some areas, and the tailgate inner panel picked up a few marks from rubbing on kit in the boot.

I’m not based in the Auto Express London office, so I’ve not used the Rexton for the daily commute, but not every journey has been with the car loaded with tyres, tools and a trailer. With just me in the car the Rexton’s shortcomings are revealed – particularly the ride, which benefits from a bit of extra load to dampen its excesses.

The 4x4’s separate chassis construction was never going to match rivals such as the Skoda Kodiaq, but there have been times on poor roads when it has been a trial. On half-decent surfaces everything is pretty well damped, but hit a pothole and the car shudders and struggles to settle. On a cross-country trip on A and B-roads it can really start to grate.

The other main irritant is the gearbox, which smacks of outdated tech from the first time you drag the lever through the staggered gate. It prefers to do nothing quickly, which includes shifting from drive to park. It’s also slow off the mark and using the small lever on the shifter to select gears manually is useless. Still, it’s smooth and the switchable 4WD set-up will suit those venturing off road. 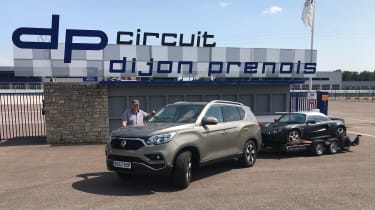 We’ve no complaints about the engine, which is well matched to the tasks this sort of vehicle will be asked to tackle, including towing up to 3,500kg.

Fuel economy is respectable, although my figures are skewed by many miles lugging a trailer with a full load inside the car as well. Since the last report I’ve managed 26.7mpg, which compares favourably with the 32.6mpg achieved by the road test team while unladen. I also appreciated the 400-mile-plus range on my long trips.

I’ve had no problems with the Rexton over more than 8,000 miles, apart from a puncture and a replacement windscreen after a lorry ‘bombed’ me. Autoglass fitted the screen, but SsangYong will have to recalibrate the around-view camera when the car returns. I topped up the oil with around half a litre over those miles, too. 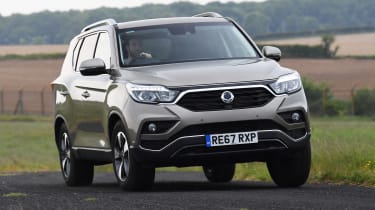 Some of the more eagle-eyed Auto Express readers may have spotted that our SsangYong Rexton was featured in a recent group test. As Kim Adams, our products editor and the man who is running the Rexton, isn’t in our London office very often, not many other members of the team get to drive his car. Our road test was a good opportunity for me to take the wheel again for the first time in a while.

Although the Rexton came third in the test behind the Skoda Kodiaq and Peugeot 5008 it was facing, I remain impressed by it in many ways, and finishing behind those two class-leading SUVs is hardly a damning indictment.

Firstly, the large 9.2-inch infotainment screen is better than you’d expect. Its interface and graphics are modern, plus its Android Auto works really well with my phone. Build quality is impressive as well, and the spacious interior means the Rexton fulfils its brief as a huge family car. 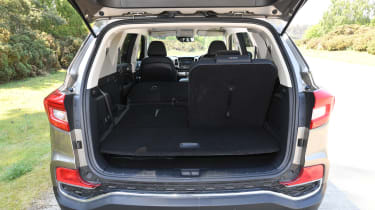 Driving to and from the test location, which was a three-hour trip each way, meant I had plenty of time to think about the SsangYong’s ride and handling, and it’s here that there’s still plenty of room for improvement. Kim rates the car highly for towing, but without the weight of a trailer the Rexton’s ride is a letdown.

It bounces and jitters constantly and never settles down, which is tiresome on a long trip. It’s fidgety on the motorway, and becomes even worse when driving in town, despite the relatively small wheels and large tyre sidewalls on the version on our fleet. 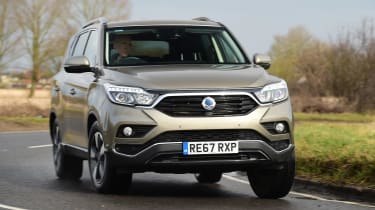 As an iPhone user, I was pleased to see Apple CarPlay among the many features on our SsangYong Rexton. The interface is intuitive and the voice recognition works well for touch-free calling, but I’ve discovered that the set-up is not perfect. While I appreciate being able to use Spotify and BBC iPlayer Radio through the system, my sat-nav app of choice, Waze, is not an option.

I can’t get on with Apple Maps and I prefer the community-based traffic alerts of Waze. It can be used on the phone with turn instructions played through the sound system instead, but if you’re listening to the DAB radio it interrupts the programme. Annoyingly, it doesn’t return to it and the station needs to be selected again.

TomTom has long been an Auto Express test favourite and it’s built into the head unit, but it lacks traffic alerts. That limits its usefulness; the main reason I run sat-nav is to avoid jams. 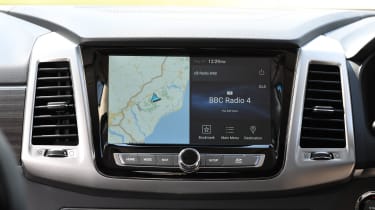 On a recent long trip I also discovered that the USB socket is not quite up to keeping my iPhone 7 Plus fully charged. I could use a more powerful adaptor in the 12V socket – but then you lose CarPlay functionality. Still, there’s enough power to ensure the phone didn’t die even on an eight-hour run from Spa, Belgium.

And it is on that sort of drive that the Rexton has really made its mark, particularly when towing my Lotus Elise. On decent roads the ride is smooth, and the engine quiet and more than up to the task. There’s also space for spares, tools and race kit. However, the trim is showing signs of wear, so I’ve added some protection as I’ve got plenty more trips planned over the coming weeks. 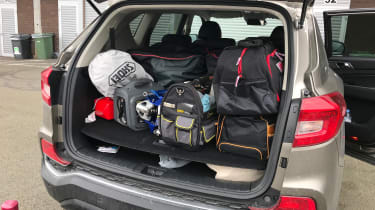 You could pretty much understand the technology and equipment on the previous-generation SsangYong Rexton in a couple of minutes. But when I collected this all-new model – which we’ll be running for the next six months – I was glad of a dealer handover from Essex SsangYong, in Witham.

As salesman Stuart Cornell passed me the keys and went through the car’s features, it became clear just how far the Rexton has moved on.

The most obvious change inside is the 9.2-inch head unit display, which allows split-screen viewing and has DAB radio, Bluetooth connectivity and TomTom sat-nav. And as my job often involves powering multiple gadgets at the same time, I was pleased to see twin 12V outlets alongside a USB port on the dash. 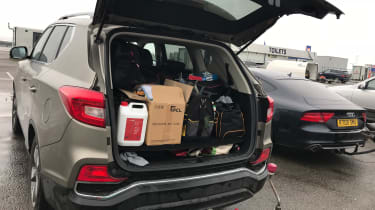 We’ve yet to explore all the options, but the dash display can be switched between driving information, sat-nav instructions or your choice of tacho and speedo. We did play with the alternatives for the indicator sound; although none of them really appeals, at least the volume can be adjusted.

While exploring all the options, I  turned off the lane departure warning, because living in the country and driving a lot on rural roads means frequent unnecessary alerts otherwise.

On the move there’s traffic sign recognition, which has so far proven very accurate, spotting even small speed limit signs, plus temporary ones placed on the verge around roadworks.

The recent wintry weather enabled me to try the four-wheel drive, because the summer tyres were struggling to cope, in RWD mode, with the snow-covered hill out of the cul-de-sac where I live. All-wheel drive is selectable with a twist of a knob and easily got the car up the incline. Had we not been on the verge of spring, I would have been tempted to switch to winter or all-season tyres, even on a 4x4. 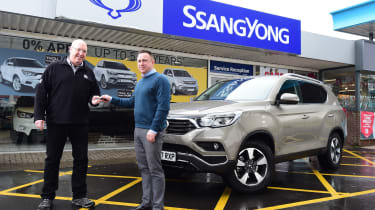 The Rexton may be loaded with all manner of electronic wizardry, but that cold snap also led me to my favourite feature: the heated steering wheel. Even after the snow melted I kept it switched on to warm my cold fingers after being outside. The wheel, combined with the heated front and rear seats, plus dual- zone air-conditioning, helped to keep the harsh weather’s effects at bay.

With such an impressive line-up of standard kit on our ELX model, it’s no surprise that our options list was short. We added the metallic paint (although I’m not convinced by the Sabia Beige finish yet) and a tow bar to take my various racing cars around the country.

I’ll be finding out if the massively improved spec has taken the Rexton away from its hard-working roots on a continental towing trip soon.