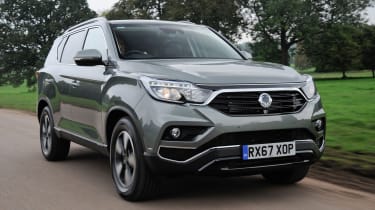 In spite of one or two rough edges, the second generation Rexton is a dramatic departure from the mediocre, cheap SUV that went before it. And with a five-year, unlimited mileage warranty to fall back on it gives buyers that extra peace of mind. However, with prices starting from in excess of £27,000 it does move SsangYong away from its value-packed ethos, and into a much more competitive segment.

SsangYong’s Rexton has always been an SUV that was a bargain basement kind of recommendation. Tough, great for agricultural types and representing a massive slice of SUV metal for not a lot of money, the Rexton never looked like matching any of the mainstream class elite, mainly because it didn’t drive well and the cabin wasn’t a strong point.

This all-new, second-generation version, though, is a lot more promising - and this is our first opportunity to drive it in the UK. The 1980s-throwback styling has been replaced by the sculpted, appealing SUV you can see here, which was previewed at last year’s Paris Motor Show as the LIV-2 concept. While perhaps not the best-looking 4x4 in the class, the Rexton is one of the sharpest looking cars in SsangYong’s lineup.

Inside, the Korean company has taken effective steps to move the Rexton much closer to the established opposition. Wood-effect trim, quilted leather, classy projected analogue dials in the cluster that are separated by a crisp digital display and a high standard of switchgear all help to make the Rexton feel as good to sit in as a Hyundai Santa Fe or Kia Sorento. That’s high praise indeed. 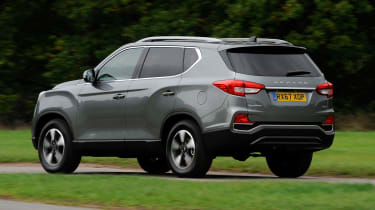 The room on board is plentiful and you can have the SsangYong as a five- or seven-seater like the version we’re testing here. Boot space is simply colossal in the five-seat model, with a minimum of 820 litres on offer and 1,977 litres with the rear seats folded away. If you occasionally need to carry more than a quintet of passengers, then the seven-seat model’s corresponding figures drop to 649 and 1,806 litres, the former of these reducing considerably if you have seven people on board.

Trim grades run EX, ELX and then Ultimate, with prices starting at £27,500. Like most Korean cars, equipment levels across the board are generous and so even the entry-level EX comes with seven seats, 17-inch alloys, air conditioning, eight-inch touchscreen infotainment, cruise control, plenty of safety assist systems and useful gadgets such as all-round parking sensors and auto lights and wipers.

Both ELX and Ultimate build up the luxuries, to the point that the latter only has two cost options to inflate its £37,500 asking price: metallic paint and a tow bar. TomTom satnav arrives at ELX grade, although the mapping graphics are basic, while the Ultimate has some lovely toys – like climate seats and a 3D around-view camera – but it only comes with five seats. 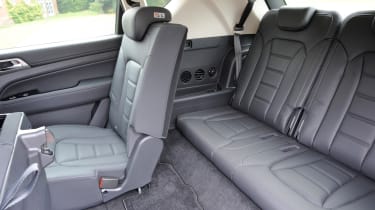 There’s just one 2.2-litre turbodiesel engine, which develops 179bhp and 420Nm of torque. It can be mated to either a six-speed manual gearbox or a seven-speed Mercedes-sourced automatic. The quoted performance and economy figures are middling on the Rexton, and on our test route we only saw around 26mpg while driving in a reasonably careful manner. That’s pretty dire.

Yet it’s a much more civilised proposition on the road than previously. Body control is good, as the Rexton gamely resists extreme body roll in corners, and the engine stays quiet unless you rev it past 3,000rpm, where it becomes coarse. The auto is slow-witted but otherwise smooth, while grip levels are high and the steering is pleasingly responsive and weighty.

Sadly, there’s a constant shudder over corrugated surfaces on optional 20-inch wheels - you’re far better off sticking with the standard 18-inch options. Off-road, the Rexton is very competent thanks to its proper locking centre differential and low-range mode.

Off-road, it’s really good, as it has a proper locking centre differential and low-range mode. It’ll also haul up to 3.5 tonnes with little difficulty, as we found out while towing around a weighted horsebox. So it remains a vehicle that will appeal to the country set; it’s just that now, it’s a lot better around town, too.