The 5008 is a revolution for Peugeot. But can it beat equally transformative diesel SUVs from Skoda and SsangYong? 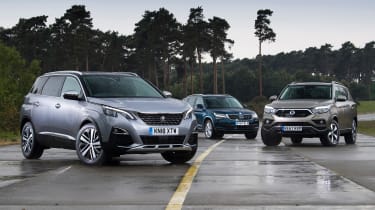 Peugeot has successfully transformed its range in recent years, with the 3008 and 5008 SUVs standing as the best examples of the brand’s revamped cars. They’re such a huge step on from their predecessors that both have won group tests in Auto Express during their time on sale.

The 5008 took its maiden road test victory in petrol form last year – but while petrol is the flavour of the month, diesel will still make more sense for many buyers. Those who drive a lot of miles in a year will benefit from the fuel savings these cars bring on motorways, while a diesel’s torquey power delivery can be useful for towing and carrying heavy loads.

So we’ve lined up the 5008 2.0 BlueHDi 180 to take on its key rival: the Skoda Kodiaq, also using a 2.0-litre diesel engine. We’ve also brought in a wild card in the shape of the SsangYong Rexton. This is another model that has been transformed in its latest iteration, but can the Korean car really match its European rivals? It’s similarly priced, so these are the competitors it needs to match up to if it wants to steal sales.

These seven-seaters aren’t built for driving enjoyment, so many buyers will prefer the ease of use that their automatic gearboxes bring. It’s the first time we’ve put an automatic Peugeot 5008 to the test as well, but which of this trio is best for practicality, economy and comfort? 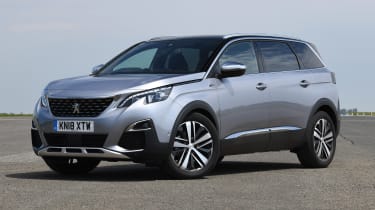 We were impressed with the manual petrol 5008 in our first test, but now it’s time to see how well this 175bhp diesel model will fare. With an automatic gearbox and seven seats to match its rivals here, this version costs £34,390 in GT Line trim.

For most customers, ride comfort will be a core selling point of these big family cruisers – and the 5008 scores very well here. Soft suspension and a long wheelbase mean the car drives smoothly on rough roads, and while there’s a bit of body movement on particularly undulating surfaces, it’s controlled fairly well.

However, the soft set-up also means that it rolls in corners more than the Skoda Kodiaq, despite the two cars having a similar level of comfort overall. That’s in part down to the small steering wheel and fast rack. You need to be smoother and more measured with your steering inputs than in the other models here to avoid unsettling the car. There isn’t much feedback through the wheel, either, but that’s a criticism you can level at all three vehicles.

The 5008’s 2.0-litre engine is the least powerful on test, although it’s only 4bhp behind the SsangYong. And because the Peugeot is the lightest car here, at 1,540kg, it performed well in our acceleration tests.

We managed 0-60mph in 8.9 seconds, which was six tenths slower than the more powerful, four-wheel-drive Skoda, but significantly ahead of the heavyweight Rexton; these cars took 8.3 seconds and 10.2 seconds respectively. 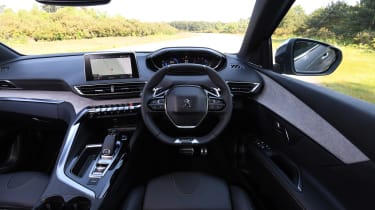 One of the biggest factors here aside from power and weight is the gearboxes. The Kodiaq’s DSG is far quicker to shift than the 5008’s eight-speed auto, and the SsangYong’s seven-speed auto is glacially slow.

The Peugeot isn’t as quiet as the Skoda on the move, and this spoils cabin refinement. The engine is more audible and there’s also more wind noise.

Testers’ notes: “Four-wheel drive isn’t available on the 5008. Instead, a Grip Control function allows you to change the stability control settings to help off road. It works relatively well and will be enough for most needs.” 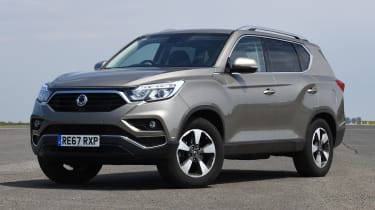 The SsangYong Rexton is a new large SUV with a lot to prove, and this seven-seat variant in ELX trim with an automatic gearbox starts at £34,995. That price pits it against the two talented European models in this test, so does the Korean 4x4 have what it takes to score highly here?

The Rexton has a much more European feel on the inside, but the old-fashioned pick-up-style chassis under the skin means it simply can’t compete with either of these rivals for ride or handling. The SsangYong never settles down, with the chassis constantly jiggling around beneath you.

It feels particularly out of its depth on rough surfaces in town, because the low-speed ride is disappointing. It doesn’t improve a huge amount as you get on to faster roads, but it’s just about acceptable at motorway speeds. That’s in contrast to its rivals here, both of which ride very smoothly in all conditions by comparison.

Even the soft suspension set-up doesn’t help; while the car doesn’t jolt into potholes, there’s lots of body roll in corners and numb steering.

A hefty kerbweight means the Rexton isn’t very agile, and it also hampered its performance in our acceleration tests. It took 10.2 seconds to go from 0-60mph and, thanks to its slow- shifting automatic transmission, 10.5 seconds to cover 30-70mph through the gears. That was significantly behind the 5008 and Kodiaq. 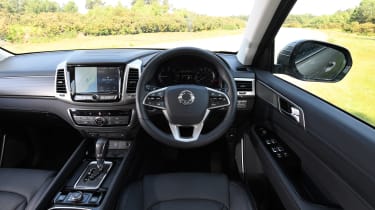 Although its ride and performance are poor, the SsangYong does have a comfortable driving position, and the 2.2-litre diesel feels punchy enough out on the road. With 420Nm of torque available from as low as 1,600rpm, there’s performance available when you need it, and it makes a decent tow car, too, as we’ve learned from the Rexton we’re running on our fleet.

The gearbox is smooth enough when you’re driving normally, and while it feels overwhelmed if you push a bit harder, that’s not what the seven-speed auto was designed for. It was another big factor in the Rexton’s performance at the track, because the changes are pretty slow; it’s night and day next to the swift DSG gearbox in the Kodiaq. However, the SsangYong does feature a proper switchable 4x4 system, so it’s the best off-roader of the bunch.

Testers’ notes: “The Rexton feels unwieldy on British roads due to its sheer size, but poor visibility and slow steering don’t help matters. At least there’s a standard rear camera to help with parking.” 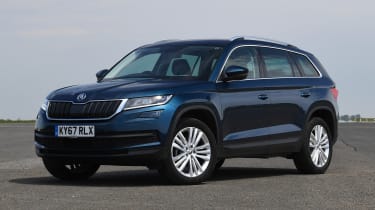 When the Skoda and Peugeot last met in petrol form, the 5008 took victory. But the 2.0 TDI 190 DSG SE L Kodiaq we’ve lined up here has won all of its group tests so far. It costs from £34,800 in seven-seat guise, to match its opponents in this test.

Our Kodiaq’s 2.0-litre diesel can be found in a number of other VW Group models, and it’s just as strong here as in any other application. It’s the most powerful engine in this test, with 187bhp; the Peugeot and SsangYong have 175bhp and 179bhp respectively.

The Kodiaq generally outperformed its rivals in our tests at the track, taking 8.3 seconds to go from 0-60mph, in part thanks to the quick-shifting DSG gearbox and strong traction off the line, boosted by that four-wheel-drive system.

The SsangYong could only record kickdown figures, because it refuses to hold on to gears in manual mode, but the Skoda was faster from 30-50mph in third than both rivals.

In higher gears, the Peugeot started to pull away, though; the Kodiaq took 16.4 seconds to go from 50-70mph in seventh, while the lighter Peugeot took just 9.6 seconds.

The Kodiaq is the most composed car of the three when cornering quickly, and while the steering doesn’t have a lot of feel, it’s precise enough to place the big Skoda on the road. Even on 19-inch wheels, the Kodiaq rides well, soaking up rough road surfaces and bigger potholes, although at low speed you can feel them thud into the cabin more than in the Peugeot. 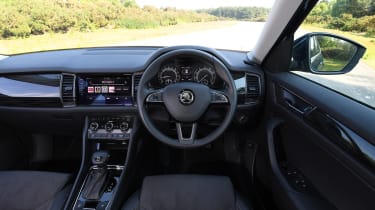 The driving position is the most comfortable here, but it is fairly upright and those with long legs might find that they rest against the steering column. As the Skoda’s engine produces its torque low down in the rev range, with 400Nm at 1,750rpm, it doesn’t have to hold on to gears, and this helps with refinement. Driving at a relaxed pace, diesel rattles are firmly in the background.

Testers’ notes: “Practicality is one of the Skoda’s strongest points, but it’s not all about that. This is a top all-rounder. We love its refinement, composed handling and upmarket interior as well.” 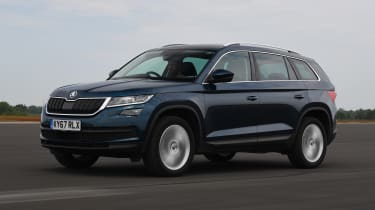 It’s a close finish between the Kodiaq and 5008 here, because both are top seven-seat SUV choices. But in this form, the quieter engine, smooth and quick-shifting DSG box and lower monthly payments mean the Skoda takes victory. It’s just as practical and will be affordable to run, plus the fact it has four-wheel drive and some extra towing capacity over its rival helps, too. 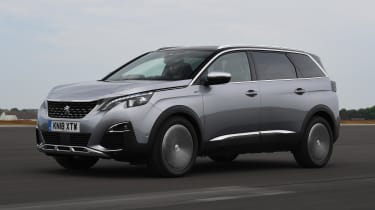 While the 5008 is stylish, good to drive and economical, it finishes a close second here. It makes more sense in more affordable Allure trim, as you get the same great practicality and comfort, as well as much of the same kit. It’s the most spacious car of the three and delivers decent performance, but it wasn’t by a big enough margin to steal victory from the Kodiaq. 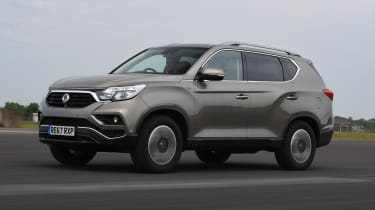 The Rexton has come a long way with this most recent model, but at this price it’s hard to justify next to its European rivals. The uncomfortable chassis means it’s also the least agile choice, while it’s not as efficient and it’s less spacious than its rivals, despite being bigger than both on the outside. It’s well equipped, but doesn’t look great value when compared with the Kodiaq and 5008. 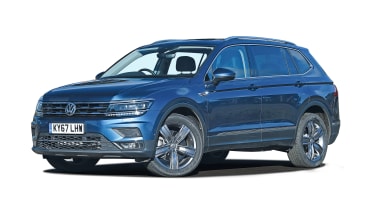 The Tiguan Allspace uses the same platform and engine as the Kodiaq, so it scores highly on handling and refinement. It’s not quite as good value as the Skoda, but quality is excellent and it comes with plenty of kit in SE Navigation trim. 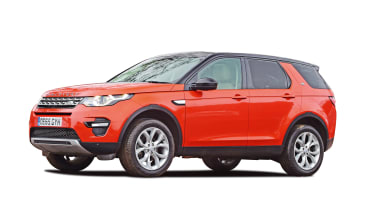 Go for a used model and your options include premium SUVs such as the Discovery Sport. This seven-seater lacks a little space but is refined and great on and off road. We found a high-spec HSE 2.0 TD4 with just 14,000 miles for £31,500.